This past week I've had a horrible cold. I don't get sick too often these days (thank goodness!) because when I do, I turn into a big baby. I know no one likes being sick, but I just get very dramatic and whiny. With John being out of town, I really turned to my mom to get me through this last week. She didn't have a car on Tuesday when I woke up feeling like death warmed over (Chris's truck was in the shop so he took my moms car to work.) So I mustered up enough energy to tell the girls to get in the car and I drove over to moms house. I crawled up in her bed and went back to sleep while she and the girls played and made merry.

They actually worked on a pretty cool project. Mom got out a big piece of cardboard (a flattened box), a bunch of fabric scraps, sea glass, rocks, buttons and other miscellaneous bits. Then she told the girls to make a fairy garden. They spread out some brown fabric for dirt and blue for a pond. They made a garden with fabric with tiny flowers on it. They cut out some animals from a catalog and added rocks and made paths. It was like a huge textured art piece. Mom took a photo of the finished piece, I'll have to get it from her and add it later.

I managed to surface for some homemade egg drop soup for lunch and that's when the girls showed me their project. Then I went back to bed while they went to go watch Willy Wonka and The Chocolate Factory on mom's TV. Late afternoon, I kid myself into thinking I was feeling better and we went home.

Dumb. I started feeling even worse, did NOT feel like driving back over to moms and she still didn't have a car. I managed to make it through the afternoon and put peanut butter sandwiches in front of the kids for dinner.

Wednesday morning I thought I was feeling a bit better but we still took it easy. I managed to get the girls to gymnastics, but just barely. The rest of the day was spent taking it easy, because I was in fact NOT better. On Thursday mom came over to take the girls to Story time, but because of a combination of no gas in my van and a tempertantrum from Maddie they were late and missed storytime, but spent some time at the library anyway. Then mom had to go pick up Chris from work, but they came back over and we ordered pizza and Chris helped me put the girls to bed.

Yesterday, I thought I was feeling better but anytime I did anything at all I started up a 30 minute coughing fit. The girls thankfully got really involved in playing upstairs and they spent hours lost in their imaginations. I was feeling better in a stationary sort of way and I was just itching to play with my new sewing machine that was my birthday/christmas present from John. It came in on Monday night and I've been too sick to do anything with it. So yesterday I did a very simple upcycling project that came out so cute! 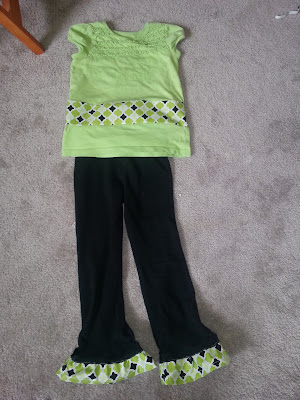 I took a pair of their knit pants that were too short and added a ruffle to the bottom, then I cut one of their shirts that was too short but still fit across the shoulders in half and added a band to lengthen it. The end result came out really cute! It was a very easy project that I could do without moving too much.

Mom had us over for homemade Stroganauff last night for dinner and it was so good. I wish I had taken some leftovers home... hum... bad planning on my part! Maybe I'll have to stop by around lunch time today... Anyway, just after dinner time, I was going to take the girls home and get them ready for bed when out of no where a migraine started to show up. Luckily I've gotten good at recognizing the symptoms quickly and if I can get caffeine, Tylenol and an ice pack in/on me fast I can nip it in the bud. I had to go lay down for a while to wait for the caffeine and tylenol to kick in. Which gave the girls the excuse to start a new art project with mom! I'm guessing the migraine started because of all the coughing I did yesterday really rattled my brain around. We finally made it home, got the girls in bed and then I had 24 books to wrap.

I saw the idea last year and didn't do it, so I was determined to do it this year. I wrapped (actually 20, I need to get 4 more books) enough books for us to read one book a night all the way to Christmas Eve. Tonight's book will be Elf on the Shelf (our Elf came this morning!) and the last book is Twas the Night Before Christmas. There are all kinds of Christmas books in between! From a Strawberry Shortcake Berry Merry Christmas, to one about Angels, Frosty, Rudolph and more! I think it's going to be a fun tradition.

This morning I'm once again cautiously optimistic that I am feeling better. We'll see how the day plays out. But what a strange and exhausting week I've had.
Posted by Amanda at 9:39 AM