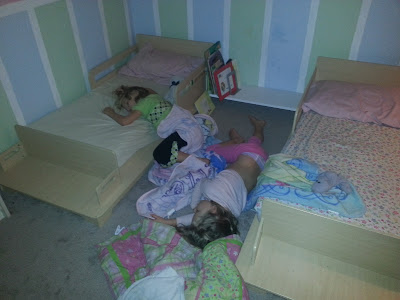 Izzie and Maddie fell asleep in funny positions. And yes, Izzie is wearing clothes instead of pajamas because she told me that NONE of her nightgowns are ANY good anymore. Which is mostly true... most of their pj's are 4T and they are in 6's. I'm just so dang picky on nightgowns. I don't buy any clothes with characters on them for my kids. (Well I did make an exception and bought some Minnie Mouse things for the cruise.)  But most girls nightgowns (at target) are plastered with princesses or dora or hello kitty. And yes, I should venture out past Target but I'm not a huge shopper and I don't want to spend that much on nighties anyway. They have a lot of just plain boys t-shirts in larger sizes for some of their pj's but even those are getting too small. Anyway... poor Izzie decided clothes would be better. 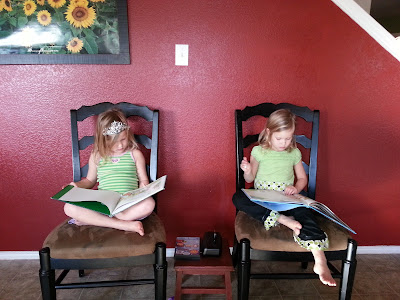 I pulled away the chairs to sweep under the table and they grabbed their iPod and some books and started reading and listening to music. (Maddie and Izzie.) 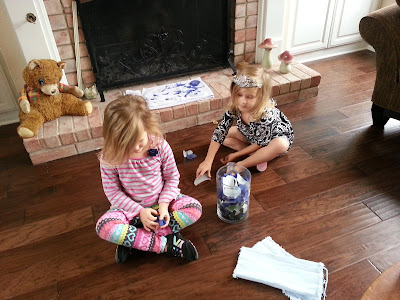 This is just plain funny. Maddie and Izzie playing with broken wine bottles. Haha! My mom has a glass grinder. Well actually she bought it for me, but she's been using it more than I have. I was really into mosaics for awhile a few years ago. Anyway Mom has this big wine bottle project she's been doing in the garden. But over the course of time some of the bottles have broken. She throws the big shards into the grinder and they make the edges soft and it looks like sea glass. The girls are fascinated and love sorting it. We do watch them closely because if one of the pieces breaks again, there would be a new sharp edge but it does sort of teach them to respect something that can potentially be dangerous. They love building mazes and fairy houses out of this broken (but dull) glass. 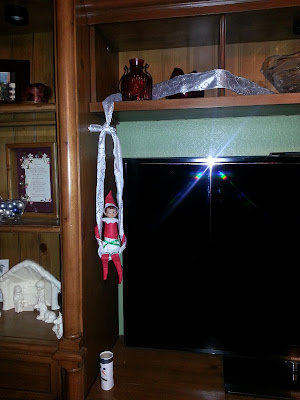 Rainbow just' a hangin out. 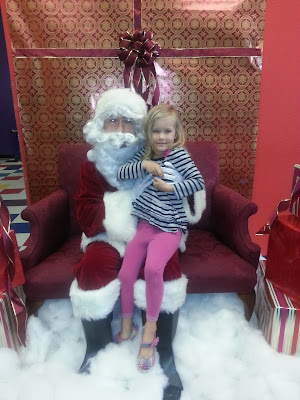 Izzie at the PAMOM Christmas party. Maddie didn't want anything to do with Santa this day. 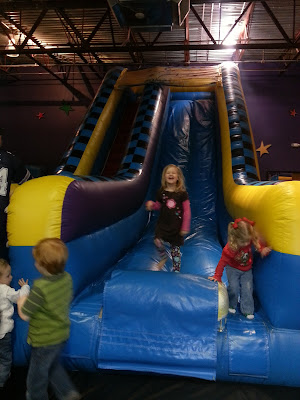 Maddie. The PAMOM Holiday party was at a bounce house this year. Not too Holiday feeling but the kids had a BLAST. 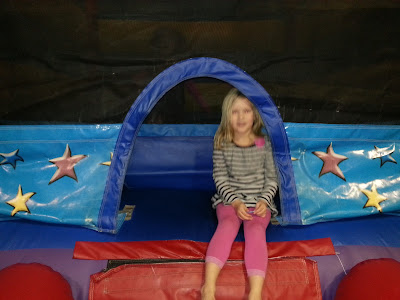 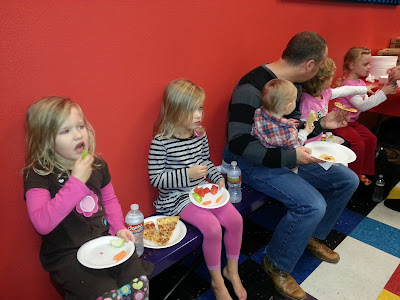 Break for snack. They brought in Cici's pizza which equates to cardboard. The girls wanted a piece but they ate mostly fruit and veg. They tasted the pizza and asked, "Do we HAVE to eat this? It's yucky!" Go girls! 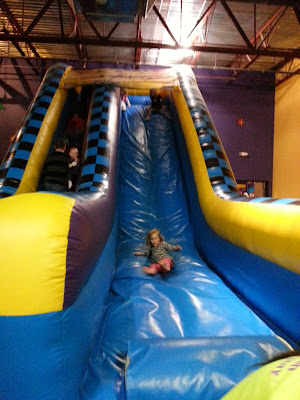 Izzie going down the big slide for the 100th time. 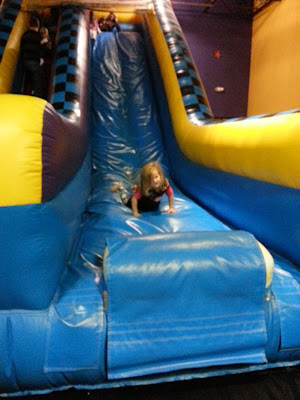 And Maddie going down head first. 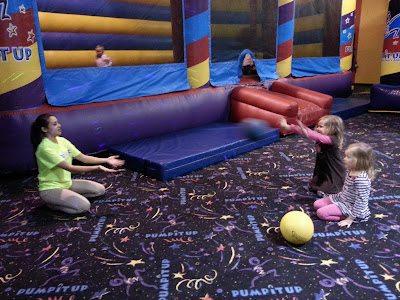 At one point the girls were bouncing and found a hole in the bounce house. They went and told this employee and she checked it out. She assured them that it was okay and then she started playing chase and ball with them. I think it made the girls day. And I was proud of them for telling an adult about a problem that they had found. 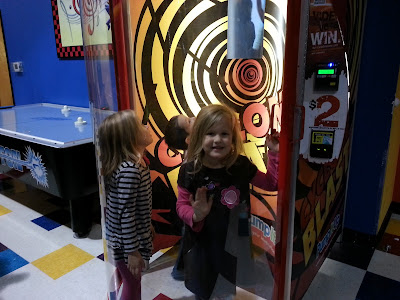 This was a wind tunnel machine but we the kids were just having fun standing in it not turned on. 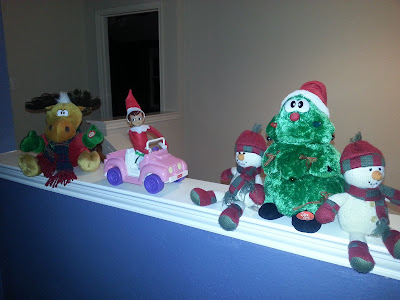 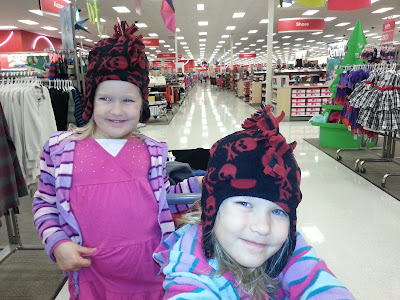 Izzie and Maddie. We needed new hats this year because their old ones didn't fit on their heads anymore. Which was sad because they were so cute and had little ears on them. The girls saw these at Target and got really excited. I love the mohawk going down them. 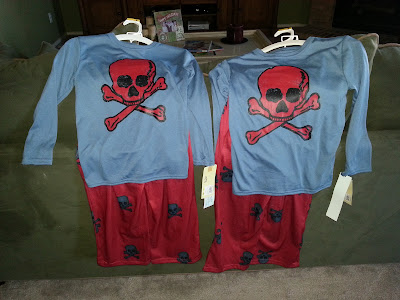 Then they saw these nightgowns hanging on a rack. The biggest size was up front and they thought they were for grown ups. I told them that they did come in their size and they were so excited. They wore them for 3 days straight. I finally told them to take them off so I could wash them. (They took them off for gymnastics and storytime but they went back on as soon as we got home!) 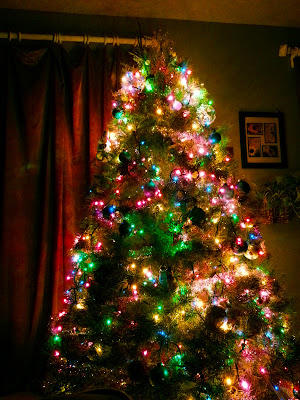 Love this pic I snapped of our tree. 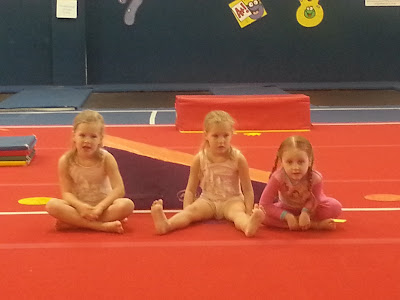 Maddie, Izzie and Riley at gymnastics.
Posted by Amanda at 10:47 AM

You know I love the part about no characters and the yucky pizza!  ;)

I am not sure what sizes they have in little girls', but in the toddler sizes I've found cute pj's at Walmart.  I also stop in Old Navy and Gymboree every time I'm in the mall to check out their clearance.  I have found pj's there for about $5 each from time to time.  That's one thing I stock up on.

We were at a Christmas get-together yesterday, and they served hot chocolate.  B had a couple of sips, but A asked for water instead.  And then they were served hot dogs for lunch.  The girls pulled out the weiner and just ate the bread.  Then, the first thing they said in the car way, "Mommy, can we have fruit and milk when we get home?"  Love it!  ;)

Hope you have a great Sunday!