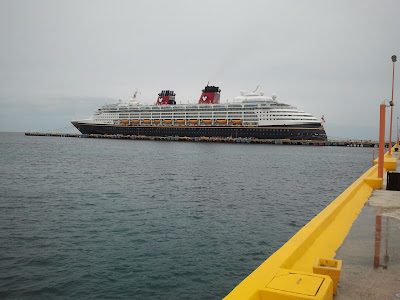 Well we got back from our Disney Cruise late last Saturday night. It was an awesome experience, and yes, I do want to go again! I knew once I went on a cruise, I'd be hooked and sure enough... I am! I had so much fun going to the shows, the activities, the dining experiences and most of all, just relaxing. I loved making sure that the girls had a great time and that they got to meet the princesses that were on the ship.

But it wasn't the magical vacation I had hoped. My mom did not make it aboard the ship. It was seriously devastating. My sister, the girls and I had already boarded the ship while Mom stayed back in the terminal to wait for Chris to park the car. They were going to board together. Rhonda, the girls and I found our stateroom and were settling in when I realized that it'd been awhile and that we hadn't heard from mom. A quick look at my cell phone showed that I did not have cell service down in the middle of the boat. So we made ourselves up the stairs and I get a call from mom. She's crying and telling me that she isn't allowed on the ship. She had a hospital issued birth certification instead of a state issued one. She'd used that certificate before to get on a previous cruise so she had no reason to expect it wouldn't work for this one. Apparently homeland security changes some rules. They escorted her to a small room guarded by two security men. We didn't get to say a real good bye and Chris had to quickly board because it was time to disembark. We didn't have much time to figure anything out, and I hardly had time to even talk to her. She said that they would not refund our cruise so the best thing to do was just to have fun. Which was easier said than done when I knew how much this cruise meant to her.

But for my kids sake, I pulled myself together and we went to go find Mickey out on Deck 10. Right before the boat sailed away Rhonda talked to mom and found out that if we went to the back of the boat we could wave good bye to her through a tiny little window out on the dock. It was so heart breaking and we were literally down on our knees bawling our eyes out. People gave us a wide berth, they must have been very confused why two adults were crying on the first day of a cruise. But the girls were starting to get upset so I quickly dried my tears and we went on to try to have more fun.

We took a bunch of pictures and thought of mom often during the cruise. It was hard at first, but eventually I found myself having fun without feeling too guilty. I wanted my Mom right there with me. It was just so stinking unfair. I try to separate that from the experience of the cruise and when I do, Disney is awesome. I've never been on any other cruise, but I can imagine it would be hard to top the level that they produced. We had a host (housekeeper) named Laurel that made our beds each morning and turned them down each night. He made fun little towel creatures (think origami with towels) on our bed each night with little chocolates on our pillows. He put the bunk beds away each morning and pulled them out again at night so we'd have a "little" extra room in our interior stateroom.

The ship has three main dining rooms. Animators Palate, Parrot Cay and Lumiere's. We rotated through the three dining rooms, going to Animators one extra time since it was a seven night cruise. Our waiters, Mario and Dharma followed our table each night and they were awesome. Mario realized that I liked fruit and milk for the girls so each night when we arrived at the table as soon as we sat down, fruit and milk appeared without me saying anything. If you debated between two desserts, he'd bring both out so you wouldn't have to feel greedy, but you still got to taste both! They cut my girls chicken up for me so I could sit and enjoy my dinner and they were thrilled to bring out new things for the girls to try like lobster and duck confit.

The shows on the ship were pretty spectacular. I really, really enjoyed Villians Tonight, but I think my favorite was Disney Dreams. The girls also really loved the shows, but I think their favorite part was fighting over sitting in Popo's lap. We also got to see Brave, Tangled 3D and Nemo 3D while on the ship. I wanted to watch a movie in the pool, but that was one thing that we never ended up doing. We did go to the pool a couple of times, mostly while in port. When everyone else got off the boat it was so nice to have more space. One morning we had the Mickey pool all to ourselves. Pirate night was a blast and I'm so glad mom pushed me to make costumes for the girls and I. It was so fun dressing up and walking around the ship like a pirate. The girls even got best costume in the kids club!! We tried to make it to the Pirate party, but it didn't start until 9:45 and the girls were beyond tired. I even made sure they took a nap that day, but it didn't help. My friends told me that their kids stayed up until midnight every night on the cruise, but my sleepyheads were tucked and snoring by 9:30/9:45 each night. But I won't complain because most of the year it is an AWESOME thing to have great sleepers.

On the last day, it was bittersweet. Like the end of any vacation you don't want it to end, but we were very anxious to see mom and see how her week went. On the last day, I made sure to spend as much time as I could on Deck 4. It was my favorite spot on the ship. It was the joggers track, but along the edges was comfy loungers. I loved laying out in the loungers watching the ocean sail on by, reading my book. It was peaceful and relaxing. The girls would bring their books or iPads out there and we did spend a lot of time out on Deck 4!

When it was time to get off the boat, we got to give mom big hugs and then we proceeded to fill her ears with cruise talk. On and on we went! But before we left Galveston we decided to spontaneously take the girls down the beach. They'd never swam in the ocean before and they LOVED it. We'll definitely have to repeat that experience! One and half hours is NOT long enough to spend on the beach, but we weren't really prepared. We had no buckets, chairs or other beach gear and we had to get back to Dallas. It was a wonderful, terrific, super vacation. I really do hope that we'll be able to all go together one of these days!