Lots of Lessons, but lots of fun too! 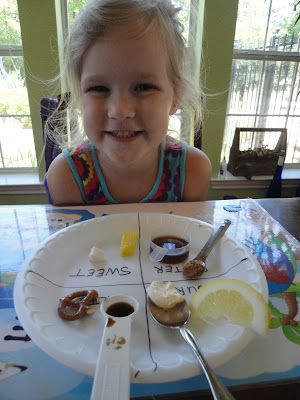 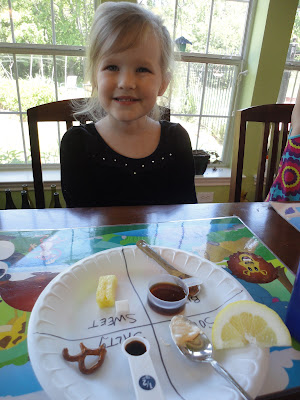 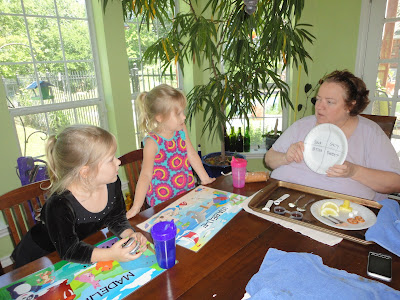 We did this lesson at Nanna's house. Here Nanna is explaining what the different tastes are. 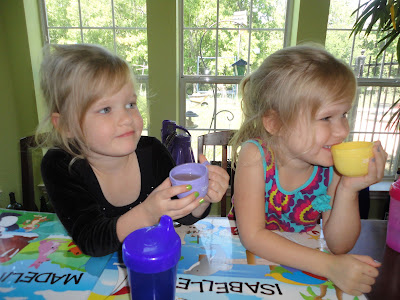 Then we followed up with a lesson on Juice. As people who know me know, I don't let my girls drink juice. They drink water, milk, kombucha or water kefir (the last two are probiotic drinks they get occasionally.) We talked about how juice was made.

First we talked about sugar. (Wish I had a photo!) But we started with REAL sugars like: Maple Syrup and Honey. Then we went to Raw Cane Sugar which is more processed but still fairly healthy. Then we showed white sugar and last in the most processed category we showed corn syrup (not HFCS, which I'm not even sure you can buy as a household.) We explained that companies like to use cheap sugar so they can make more money but the cheap sugar doesn't have as many vitamins and minerals.

So we started with lemonaide and we used Lemons, warmed up honey and water. They said it was so tasty. Then we made homemade fresh squeezed orange juice. Which only had 1 ingredient! Then we showed how not all companies use cheap sugar and showed them some orange juice that was okay. It still had absorbic acid (which we explained helps it not decay, a word they already know.) We did not go into the fact that store bought juice is pasteurized which kills the vitamins but we did talk about the fact that it wasn't a whole fruit when you drink the juice, so you are leaving some of the healthy stuff behind.

Next we took a package of koolaide and made instant orange juice. We told them it smelled like oranges and may even taste sorta like oranges but there were NO oranges in the ingredient list! It was a fake food made in a factory. They had a really good time counting the ingredients on each thing we made.

Last we pretended to be a factory. Mom got some orange extract and we smelled it. It smelled like oranges so we put it in a glass of water. But it wasn't the right color. So we took out some food coloring. The only thing we use food coloring for (except the one time I made green milk, which I'm still cringing at that I did) is homemade art supplies. So we added the food coloring to make it look "orange." Then we said but it isn't sweet enough so we globbed in some corn syrup and stirred it all up. We asked the girls if they wanted to taste. As you can see below, Izzie is saying, "NO WAY! That's YUCKY!"  I think our juice lesson hit home. Not all juice is terrible, but in most cases, even if it is a healthy juice, it is still a sometimes food.

(By the way, this was tied into our Five in a Row lesson on Lentil.) 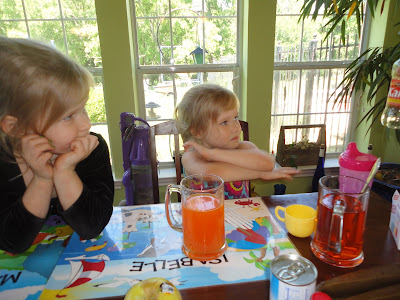 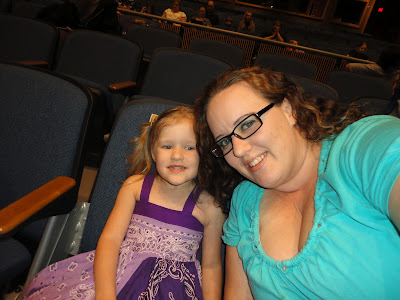 Maddie and Momma at the girls' first play, Charlotte's Web. 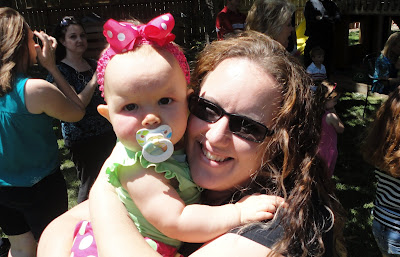 Holly and Me at Lucy's 3rd Birthday Party 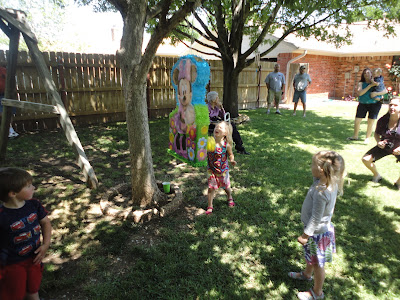 Izzie hitting the pinata. Both girls picked out their own party dresses that morning and there was no changing their minds on mixing patterns. 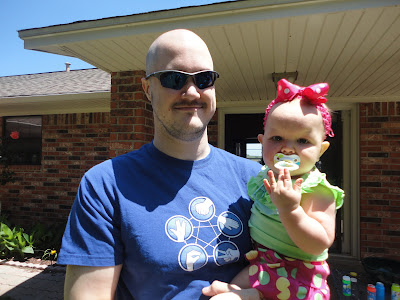 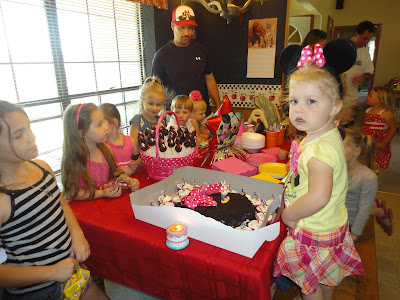 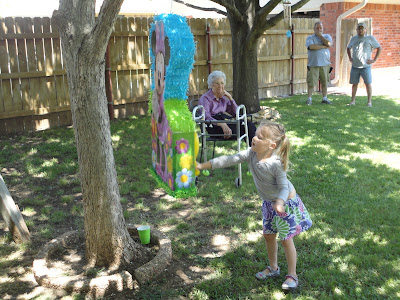 Maddie's turn at the pinata. 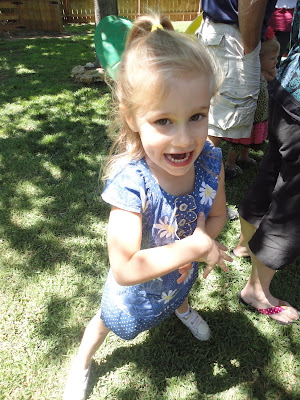 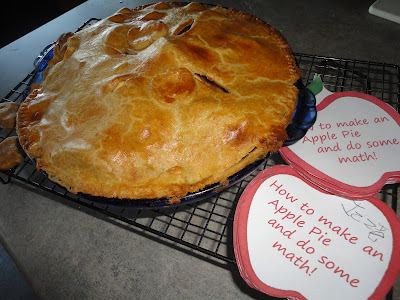 We made Apple Pie's yesterday as one of our lessons from How to Make and Apple Pie and See the World. I think it came out pretty cute! I made them little apple books with facts and problems to work out while we were cooking. 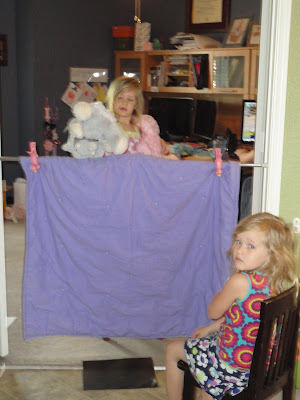 A bit out of order here, but this is Izzie and Maddie putting on a puppet show. 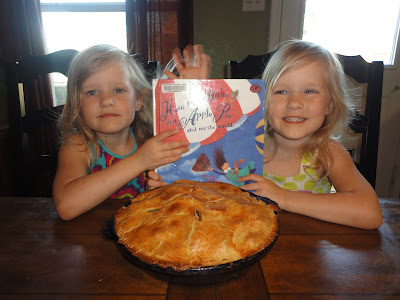 Maddie and Izzie showing off the pie they made! 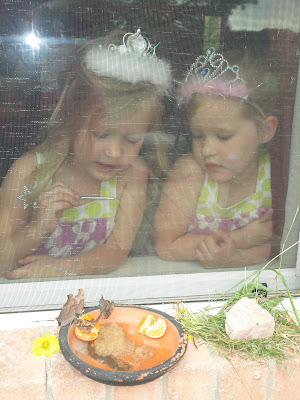 Izzie and Maddie looking at the butterfly dish we put out that attracted lots of butterflies! It had a little orange and some old water kefir grains in it.The girls added a flower off to the side (because butterflies like flowers) and decorated their table with a rock and some grass. 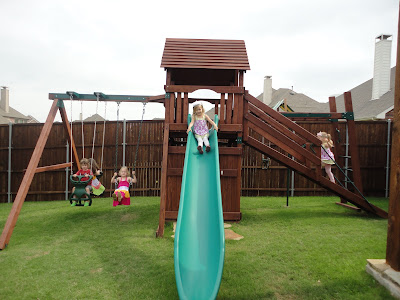 Playing at the Melker's house a couple of weeks ago! 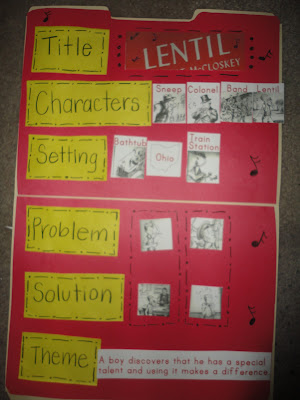 A lesson I did for the story of Lentil. The yellow cards are glued down but the rest is velcro. I think I made it a bit too complicated, but they actually did pick up Title, Character and Setting. We talked about why the author chose Lentil as the title and why not something else. 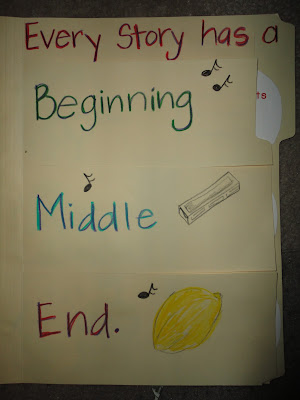 A more simple lesson was just the fact that stories have a Beginning, Middle and End. Each flap opens so they can see a picture of the different parts and help recount the story. 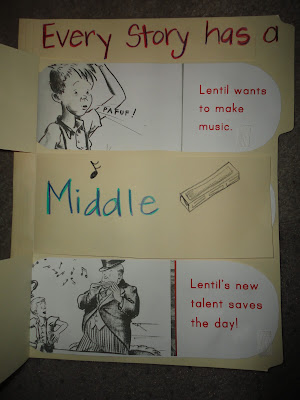 Email ThisBlogThis!Share to TwitterShare to FacebookShare to Pinterest
Labels: Five in a Row