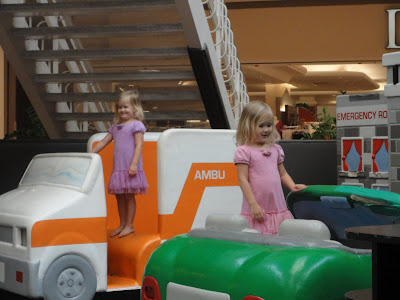 Maddie and Izzie at the Collin Creek Mall play area. 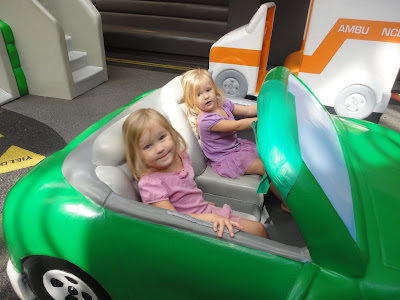 The past five days, John has been home on vacation. It's been super nice having my husband around all day. We didn't plan anything spectacular (except for attending John & Carolyn's wedding on Saturday.) Instead we just had a at-home hang out with family time. This morning the girls were a bit sad that Daddy wasn't still home. I reassured them that he'd be home after naptime like he normally is. They were cool with that. But since we were home a lot, I wanted to get out of the house with them, but I didn't want to go anywhere to spend money. I wasn't quite up for getting sweaty at a park, so to the mall we went. It was very nice since we were the only kids in the play area almost the entire time we were there. I was worried they might think it was too babyish, because it's been awhile since we've been to this mall, but they loved it.

We came home for lunch and then the girls decided to go play upstairs by themselves for a bit. (I LOVE having an upstairs playroom!!) But just before naptime, Izzie comes downstairs and tells me that she had a pee pee accident and that White Teddy got pee pee on him. I told her that mean he had to have a bath, and she wouldn't be able to sleep with him at naptime. She was a bit worried. Maddie ran and got Purple Bunny so he could watch Teddy get a bath. But the bath looked TOO fun for Purple Bunny to miss out on. I made Maddie really understand that he would NOT be dry in time for nap if he took a bath with White Teddy. She was okay with this. I was still a bit worried, but excited to have the chance to wash both loveys. I added Purple Bunny to the sink of soapy water and they had to soak. I did not want the girls see me wring out their friends, so I told them had to soak for a long time and off to nap they went. After they went down, I drained the water, finished rinsing them, wring them out as much as I can and again in a towel. Then I hang them by their ears in front of the space heater. As for nap, they both did pretty good. They choose a different friend to sleep with and were content with that, as long as I was able to reassure them that White Teddy and Purple Bunny would be dry by night time!
Posted by Amanda at 3:29 PM