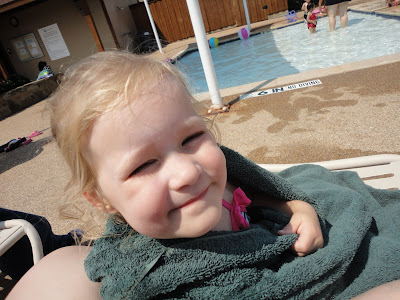 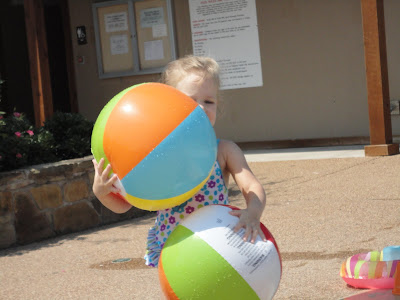 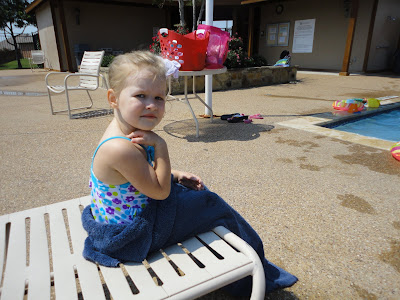 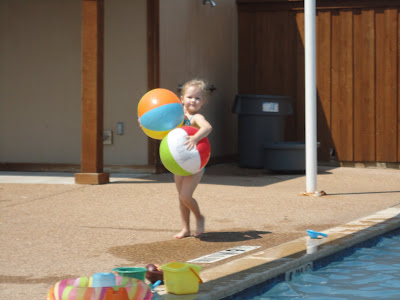 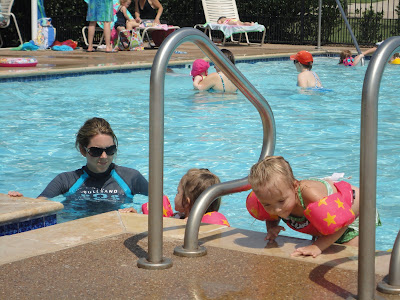 Melanie, Madison and Sydney
Yesterday I took the girls to the big swimming pool for the first time this summer. When I told them we were going to the pool Maddie said, "It's SUMMERTME!" We've been telling her that summer starts when it's time to go to the pool! We met Melanie and her girls, Madison and Sydney. We decided to go to the pool that has a splash pad on it. Which ended up being pointless since none of the kids wanted to play over at the splash pad. But they all loved the toddler pool. They had a grand time blowing bubbles, "swimming" along the bottom (which was basically crawling in the shallow water, saying, "I'm swimming, I'm swimming!") and of course lots of splashing. Maddie and Izzie kept asking to go in the big pool and I kept telling them "in a minute, in a minute!" I was being a wimp and was afraid the water was going to be too cold for me.

It actually was a very nice temperature so I put the girls puddle jumpers on and had them jump in the pool. They didn't go under water, but their faces got splashed and they both started screaming and trying to scale me to get out of the pool. I'm not 100% sure I stayed decent the entire time as they were pulling at my swimsuit and doing everything they could in this massive splashing/screaming fit. Somehow I was able to get them to calm down, even though Izzie started chanting, "I want out, I want out, I want out."

Then they decided they wanted their beach balls. That ended up being a colossal mistake because instead of them getting focused on the ball and excited to swim after it like I thought, they wouldn't let go of me, and their balls floated away which was even MORE upsetting than being in the big pool. Somehow we wrangled the balls to safety and I put the girls on the side of the pool. Then I had them get in with me one at a time. This went a bit better. They finally were happy in the pool as long as they could hold on to me pretty tightly. Madison and Sydney were happy floating by themselves in their puddle jumpers but not my girls. But Madison and Sydney just finished their two weeks of swim lessons. Ours starts on Monday. Which was the main reason I wanted to get to the pool before class. If there was going to be a regression of swimming, I wanted it not to waste swim class time. Hopefully we'll get to the pool at least once more this weekend before class on Monday. Speaking of class, the girls are looking forward to it in theory. They call it Mimi's pool (she the owner of the swim place we use) I've had to warn them that Mimi probably wasn't going to be the one teaching them this time, because she usually teaches the baby class.

In the end, we had a fun morning at the pool, but I sure was tired by the time we got home. I was glad naptime came quickly because I actually laid down myself for 30 minutes. Somehow Maddie as exhausted as she was did not take a nap. Sometimes you want to tell the kids to enjoy their naptime now because as an adult naps are so rare!
Posted by Amanda at 8:45 AM