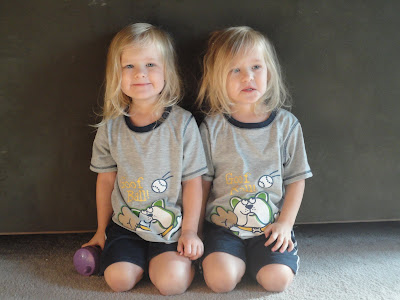 Maddie and Izzie modeling their new pajamas. I got them on the sale rack and though they were cute despite the fact that they are "boy" pajamas. The girls LOVED that they said "Goof Ball" on them.

Today has been so productive! I cleaned the kitchen (not that you can tell now!) and then I got a pot of chicken stock going, made a batch of homemade chicken nuggets to put in the freezer. Then I started a batch of homemade cereal that is about to go in the dehydrator for 24 hours. After that I got dinner started so this afternoon we can just play and I can reheat fast. The girls and I spent a long time reading library books, and we did a painting project. I wrote out a menu plan and grocery list, which isn't something I normally like to do, but decided to give it a try for a while. The girls are now napping, I'm catching up on some blogging and then I'm going to rest for a few minutes before the afternoon starts!

Our project was to make our own flag! Both girls love pointing out Texas Flags, American Flags and even company flags. (I love that they call the McDonald's flag the M flag, because they don't know McDonalds by name!) One day when we were driving I asked what they'd put on their very own flags if they had one. This led into a discussion about symbols, like a heart standing for LOVE. They decided they were going to put their initial on their flag. Maddie wanted to put a circle around hers. Izzie couldn't decide about anything except the fact it'd have an I on it. Well I finally went out to the art room and cut out a piece of an old sheet that was up there for projects like this. I let them paint their flags and then I tied them onto some old bamboo I had in the garage. They decided they wanted to put their flags out in front of their clubhouse to mark their territory (another topic we hit on lightly.) I know they really had a fun time and while their flags are mostly a blob of color, they mean a lot to them. 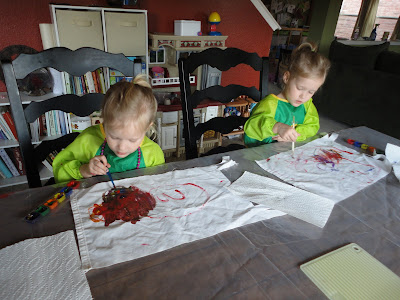 Maddie and Izzie working on their flags. You can see Maddie did start with an M and a circle. 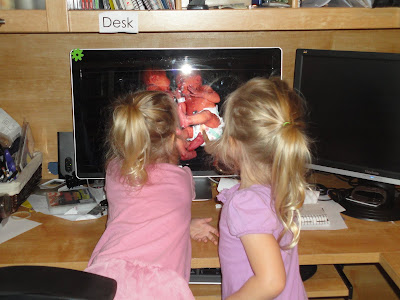 While the flags were drying the Izzie and Madie were watching a slideshow on my computer of their baby photos. They spent about 45 minutes watching the slide show and giggling. They would point to each baby and say, "That's ME!" over and over. 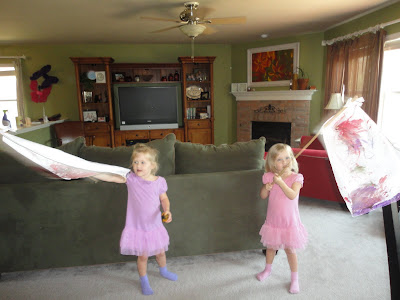 After lunch, their flags were dry and Maddie and Izzie had fun waving them around. 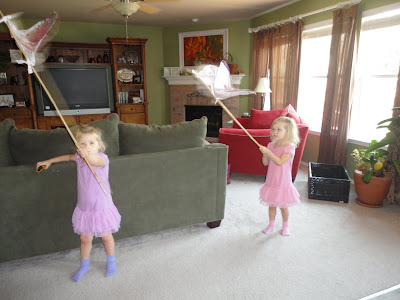 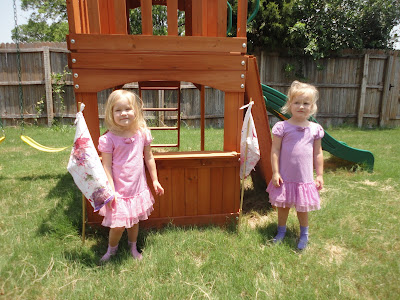 Izzie and Maddie marking their territory!
Posted by Amanda at 2:36 PM

Email ThisBlogThis!Share to TwitterShare to FacebookShare to Pinterest
Labels: art