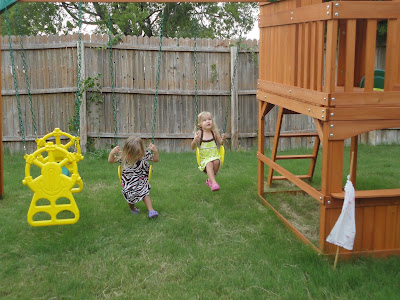 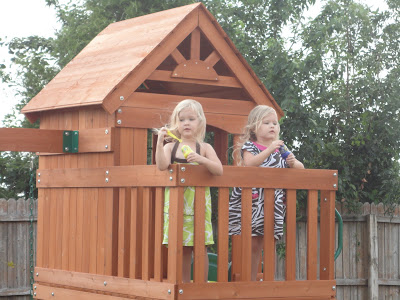 It's just halfway through another busy week here at the Dittlinger house. I'm telling you, I don't think we ever slow down! Monday was our last day at Canyon Creek Gymnastics. We really liked it there for the Mom and Tot class, but I decided it was time to move on to anther gym for the older class. We are trying out ASI tomorrow to see how that goes. There is also the possibility of doing dance instead. I don't want to over schedule so we are just going to pick one physical activity class. It was a sad class on Monday because the girls knew it was their last time there. They made a good bye card for Coach Kalynn their favorite coach, but she was out for the day and we missed her. They hardly wanted to participate because they were so sad. She was so great with them!

Another thing to note about Monday was that the fact the girls were officially 3.5 years old. They were very excited about this fact when I told them about it. They did ask if it meant the got a cake. It would have been cute to do cupcakes or something but I just didn't think about it! Coincidentally, we decided to put the girls in pull ups at night time and put a little potty chair in their room on Monday night. The next day at a playdate I heard both girls tell their friends "Since we are three and a half now we get potties in our room!" I thought it was cute they were excited about this. It's to encourage them to start night training without the excuse of getting to leave their room to go potty and having the temptation of playing in the sink to wash their hands or hanging out in the hallway to "wait" their turn or any other thing they could possibly cook up. There is a little potty in the corner of their room on a piddle pad, a box of wipes and a ziplock bag for the dirty wipey. So far it has been a big success. I heard one girl use the potty this morning around 6:30 am and then go back to sleep for another hour!

Tuesday was a playdate at my house. Originally the plan was to have a splash playdate with Madison and Sydney, Gabe and Misty's quads: River, Raine, Sky and Juju. Sadly, two of the quads woke up with fevers so they had to stay home. And because of the huge rainstorm we had on Monday night (after 100 degree temperatures) it was muggy and miserable outside so we decided to play inside instead. It was still a fun playdate though!

Today we went to a preschool co-op that my friend Luisa started up at the Wylie Library. It is so cool! She planned an entire morning around the storytime theme including a spanish lesson, math lesson, letter recognition, movement and socialization. The girls were a bit overwhelmed with the five boys in the class, but for the most part they held their ground.

This afternoon, I was very disappointed I didn't have my camera on me when the girls jumped into the little splash pool with all of their clothes on! It was so funny! At first they were playing with these big sticks and "stirring" a big bowl (not a pot, as I was corrected.) Then they were splashing the stick. Then they laid on the ground and the pool walls sort of caved in and got them very wet. At this point they thought they were in trouble but I just laughed at them and asked them if they were going swimming in their clothes!?! in a very teasing voice. They jumped in and were giggling like crazy. To me, that is what summer memories are all about. Being silly and spontaneous.

Tomorrow we are doing a free trial class with ASI gymnastics to try them out and Friday I'm having an organizer come (I won her services at the PAMOM Gala last Feb!) to help me with the art room. It's just another busy week in the Dittlinger house, I'm telling you!
Posted by Amanda at 7:56 PM