New Computer for Maddie and Izzie

Today was a nothing too special kind of day. Our biggest accomplishment was going to Target and Sprouts. Sometimes I still find it amazing I can go to two stores in a row with the girls. I remember the days when just getting to Target and back was barely possible. Other than those two errands, we spent the morning just hanging out. Last night John built the girls a computer as a sort of early birthday present and the girls got to play with it some this morning.

It was pretty comical getting that thing up and running last night. First off, somehow they broke the brand new crayola mouse

before they even got to use it. It was working when John was using it to install software after they went to bed, but the next day it was not working. Then he went to install a brand new Superwhy game from Best Buy and there was no disk. We got gypped on that one!  Then we figured we'd install an old Elmo game we had. I found the case for it but no disk for that one either. So he figured to download a free Dora trial. Great idea except for some reason it won't work on their computer. As a last resort for something for them to play with we installed a game called BabySmash. It's pretty cool for itty bitty babies because the kids can just hit any key and it does something on the screen. In order to get out of the game you have to hit shift-alt-F5 or something. Their Crayola keyboard

doesn't have any F keys! But we were able to use the task manager to get out of the game. Right now it's the only thing that really works for them on their computer but its a start. They are having fun with it.

We also just spent time outside since it turned out to be a very beautiful day. We got out the chalk and drew castles, sharks, snowmen, cats and dogs among other things out on the driveway. Then Izzie asked if we could go on a LONG walk far far away from home. We went around the short block which seemed to satisfy her sense of adventure. It was a pretty good day, not doing anything extraordinary, but still having lots of fun.

Today is my mother-in-law, Jackie's birthday, hope she had a great one!! 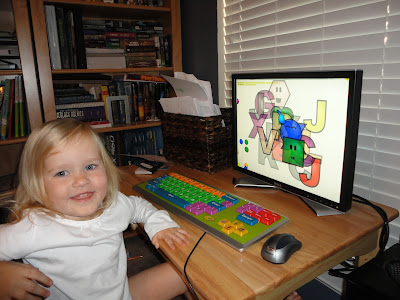 Izzie playing on her new computer. 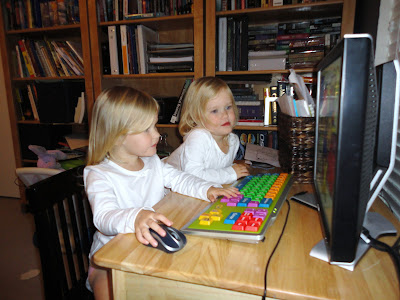 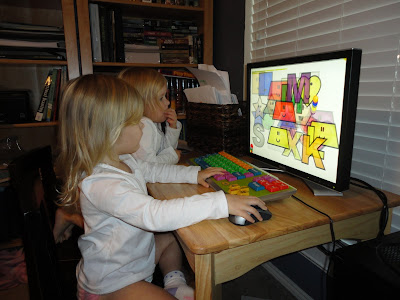 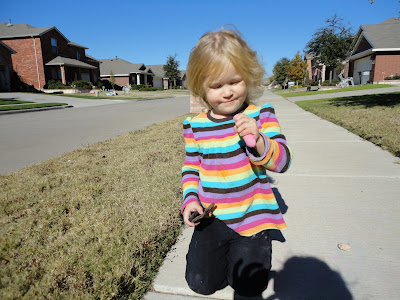 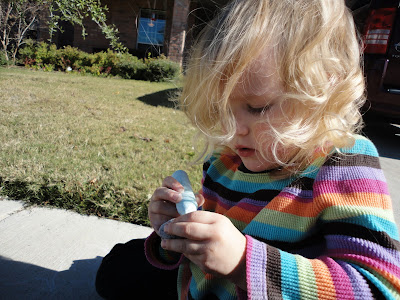 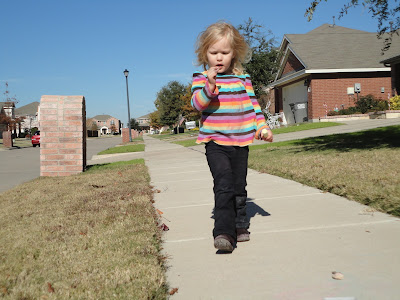 Izzie found an itty bitty flower and she asked me to put it in my hair. 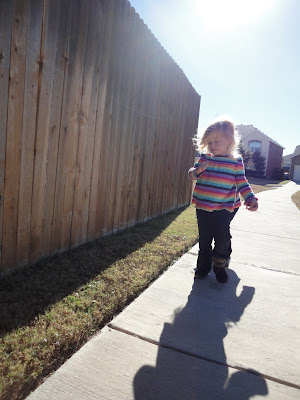 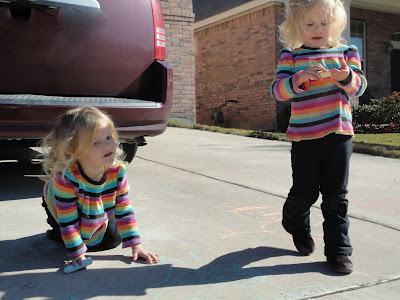 Maddie and Izzie coloring.
Posted by Amanda at 9:36 PM