I've wanted to take the girls up to see John at the office for a couple of months now, but for some reason or other it never got scheduled, or the few times it did get scheduled, it got rescheduled. Today, we finally made it! Ideally we would have visited Daddy for a bit and then gone out to lunch with him, but he had a conference call right in the middle of the day so that didn't work out. Instead we left work and met Nanna and Popo for lunch at the Twisted Root.

This morning the girls were super excited to go see Daddy at work. I think it helps toddlers to have a "picture" in their minds about where their Daddy goes all day when he mysteriously goes to a place called "work" five days out of seven. They've been up to see him a few times, but now they are getting old enough to start putting things together. Like the other day when Maddie said that Daddy goes to work to put money in her wallet. Smart little girl I got there! As we were getting ready this morning the girls kept asking over and over if it was time to leave yet. I haven't seen them get that excited to go somewhere in a while. I finally left a few minutes early because they were getting so antsy. But John was busy until 10, so I stopped and filled the van up with gas just to stall a bit. Then we finally were able to greet John at work.

He works on the top (10th) floor a pretty big building. As the girls approached the building, I told them to look up. They were pretty amazed at how tall the building was! Both girls were a bit scared of the elevator, but they did pretty good. Maddie even said that the elevator was her favorite part of the visit. We waved hello to all his co-workers that were in today and John gave the girls a tour of the building. Half of their offices are closed down, and they will (most likely) be moving to another smaller office. In the meantime there is a huge empty section of the office that is full of old cubicles. The girls had fun seeing some of these big empty desks. Then he took them to a conference room where they got to write on a big white board. Izzie kept saying, "Daddy, show me another room!" every few minutes. She was having fun seeing the big "maze" of an office. He showed her the lab, the training room, the kitchen and then it was back to his desk for a bit before it was time to go. In the lab, they found some old phones and got to play with them for a bit. In the training room they found a bunch of old notebooks with the company logo on it and got to take one home, which was pretty exciting if you are two. (Hey, I took an extra notebook too!) All in all, they had a great time visiting Daddy at work. Izzie's favorite part was looking at the computers she said. The visit lasted just long enough because Maddie started asking for lunch. We gave hugs and kisses and headed off to meet my Mom.

The Twisted Root is a local hamburger joint that is supposedly all homemade. I think they are all organic too, but I could be mistaken. I'm not 100% sold that they are all homemade (at least at the location) since they sell guacamole but no avocado. They also sell shakes but don't have milk? Either way, it is still a pretty good hamburger. I got the girls each a hotdog. They think very highly of their hotdogs since they were a bit on the pricey side. When Izzie dropped hers before even getting one bite in, I wasn't sure what to do. It wasn't her fault since the hotdog was almost as big as she was. Luckily Mom had some hamburger that wasn't dripping in hot sauce like Chris's and mine. And we convinced Maddie to share some of her hot dog too. Luckily the whole incident happened tear free which is amazing.

After such a busy morning the girls slept great this afternoon, and I even snuck in a thirty minute nap! Then we got back in the car to have an afternoon playdate with Madison and Sydney. What a full day it was! 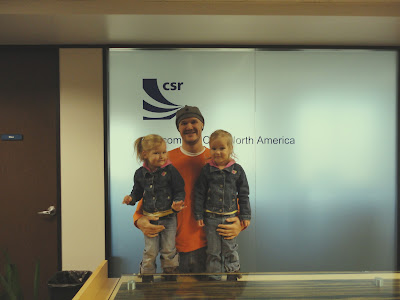 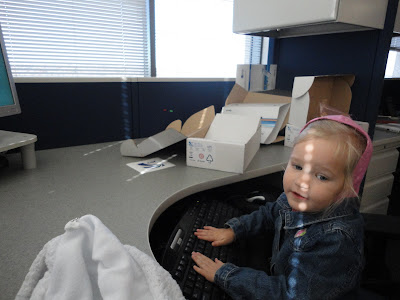 Izzie working on the comptuer. Izzie and Maddie taking some notes during a conference call. 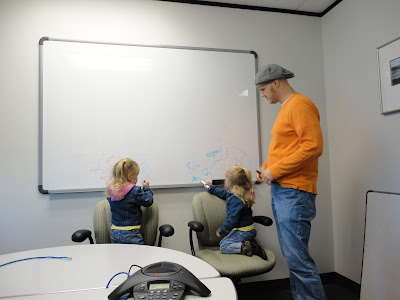 Izzie and Maddie going over some of their notes with the boss. 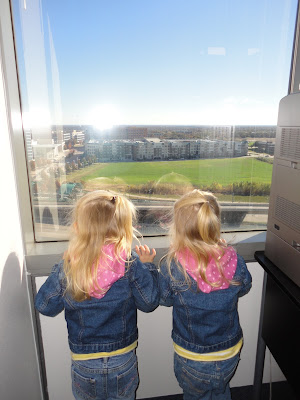 Maddie and Izzie taking a moment to enjoy the view. 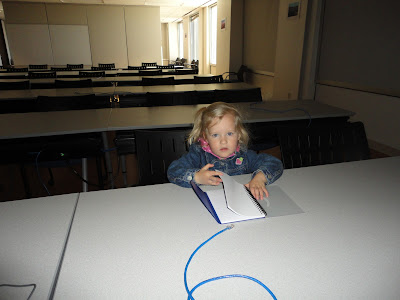 Maddie during her training course. 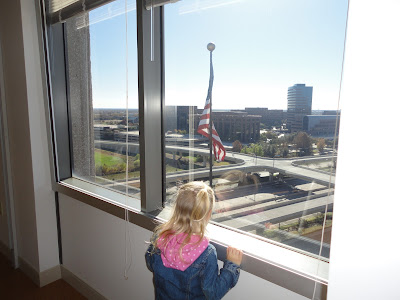 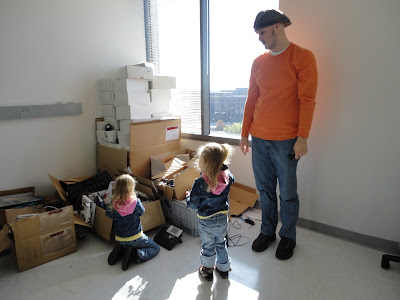 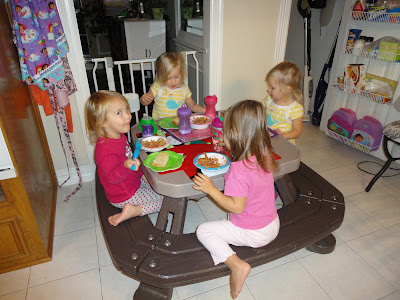 Sydney, Maddie, Izzie and Madison enjoying the yummy pasta that Melanie made for them!
Posted by Amanda at 8:42 PM

Awesome! I love bringing Aaron to Dirk's work. He insists every time we go that he needs to pack a lunch (just like dad) and eat in their break room. I remember how much fun it was as a kid going to see my mom at work. My dad drove UPS truck so I never got to go to his work :p