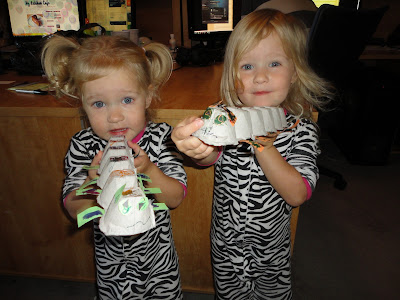 Izzie and Maddie showing off their worms.

This morning I woke up with the girls and I thought I let John sleep in a bit. But I forgot to shut the bedroom door and their early morning excitement, squeals, laughter and a bit of fighting kept drifting up the stairs and right into John's trying-to-sleep ears. Next time, I'll remember to pull the door shut. When John did come downstairs, he played with the girls while I ate breakfast and had some wake up slowly time.

Then I decided to do a quick little project with egg cartons. There are several variations of this craft from complicated with pompoms, pipe cleaners and glitter to the simple version I choose for today, construction paper and markers. The girls have only played with markers a handful of times so this was a lot of fun for them. Izzie was especially proud of the scary smile she gave her worm! Maddie carefully colored each one of her worms legs and then Izzie followed suit. Now they are reading stories to their worms, so maybe they are bookworms!
Posted by Amanda at 10:05 AM