We did it! - Shopping Stroller Free

I can't believe it, but we did it. We went to Hobby Lobby to go shopping without a stroller! I had a plan though and I think that is why we had successful morning. My plan was to keep the girls hands occupied and to give them some responsibility while shopping.

Last Easter I made the girls Easter baskets out of these little hand held shopping baskets. These baskets have come in so handy. For one thing when toys get scattered across the house I have them get their shopping baskets to gather toys. Then we sort the toys into the appropriate bins. But this morning as I was contemplating a trip to the store, my eyes landed on those baskets and I had an inspiration. I told the girls we were going to go shopping and they got to bring their own baskets to use. I told them that they had to have their listening ears on and to follow the rules. I said the rules were 1. Stay close to Momma. 2. Do not touch anything, unless you ask first. I told the girls that if they broke the rules then we would leave the store and go home. Then we got in the car and went to the store. When we pulled up to the store I asked the girls what the rules were and what would happen if they made a bad choice. They repeated the rules and the consequence then we went in.

They were very adorable as they walked through the store hand-in-hand with their baskets swinging by their sides. I think we made several grandmas smile as we made our way up and down the isles. There were lots of "don't touch that, it's breakable!" (I didn't realize how many breakables there were in Hobby Lobby until I let two, two year olds loose in the store!) And there were an even number of "You can touch that but put it back when you are done, we aren't buying it today." I'm a super tactile person so I understand how hard it is to resist touching things. On the things I told them they couldn't touch they would get about 1 inch from and "smell" it. I thought that was pretty cute/funny, until another mom gave me a look like my kids were weird. But I didn't pay much attention to it considering her kids were screaming at the top of their lungs.


Since they were so good I told them they could help me pick out an art project. We choose a ceramic unicorn and rainbow to paint. I got the items I was going for and we made our way back up to the cash register. Like magic when their shopping carts got put up on the counter so the checkout lady could scan them, they suddenly turned into "normal" twos. They were dancing, doing gymnastics, etc. At least it was an open area with no breakables and they "stayed close to momma." When I gave them back their shopping carts they were little grown-ups with a purpose. We had to go put our purchases in the car. It was a fun morning. After lunch, we painted our reward. 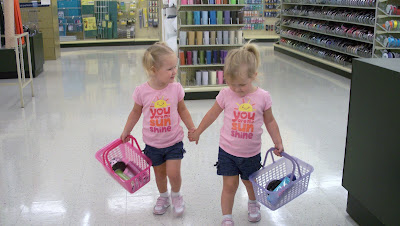 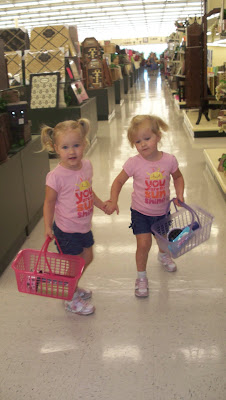 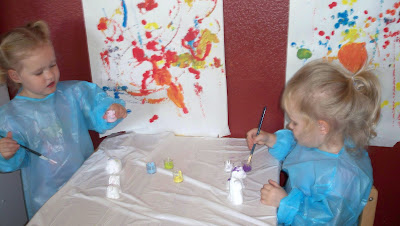 Izzie and Maddie painting their ceramic pieces.
Posted by Amanda at 1:20 PM

Wow...congratulations on this huge milestone! So now you know I'm looking ahead to next summer, thinking that I should have my girls ready to do the same...I hope so! :) And that sounds like a great idea for your girls to have had their baskets with them.

I took the girls to Panera with me a couple of weeks ago, stroller-free, just to run in for a loaf of bread. I thought it out ahead of time, that I would have a shopping bag with only my license and credit card, to have my hands as free as possible. I'm proud to say we did it...and it was so sweet to walk across the parking lot holding the girls by the hand...but it was so stressful! I just had to try it, but I'll probably wait a bit before trying again. :)