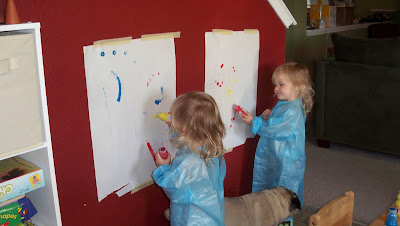 For some reason this week has been one of those weeks where I can't seem to keep track of what day it is. I can hardly believe it is only Wednesday today since it seems like it should be Friday! Yesterday the girls and I hung around in our night gowns for the early part of the morning. Our disposal was backed up and I was trying to think of ways to stay out of the kitchen, since I didn't want to add to the mess of dishes that were piled up in the sink. I called my Mom and she agreed to go to lunch with us.

Since we had some time before lunch, I pulled out an art project that I had on a back burner just waiting for a lull in activity. Dot painters! Little bottles of paint with a sponge on top. I got them on the clearance rack at a craft store along with some pretty big art smocks. Both of the girls really enjoyed painting with the dot painters and we even took time to talk a little bit about color blending. They really liked making green. Of course Maddie wanted to make purple, but it kept coming out a bit muddy. Izzie wanted to make pink but we didn't have any white paint so I told her we'd have to try that another time.

At lunch we ended up meeting Melanie and her girls so we quickly became a party of eight! It's funny how things "multiply" around us! Maddie and Izzie must be on another growth spurt because they each ate their entire meal and half of Nanna's! After lunch we made it home for a naptime and then yesterday evening I was off to my PAMOM board meeting.

This morning Mom and Chris watched the girls and I spent the morning vacuuming, doing laundry and washing dishes (Yay! John fixed the disposal all by himself!!!) Popo gave the girls some cute tiger umbrellas he bought somewhere and they were so excited to show them off to me. When Maddie woke up from her nap the first thing she wanted (even before snack) was her umbrella. Later I found her curled up under the umbrella reading a book. It was absolutely so cute.

While waiting for John to come home from work (he had to work a wee bit late tonight) the girls and I got out the playdoh. They wanted to stamp out the entire alphabet with the cookie cutters we had. We didn't have quite enough playdoh to make the whole alphabet and they weren't willing to sacrifice any of their letters to make the end of the alphabet. When we were cleaning up, Maddie carefully laid the letters in the playdoh container trying not to squish them. Izzie gleefully squished her letters into a ball.

This evening after putting them down for bed they stayed up talking for almost an hour and half. Just chattering away like two teenagers. It's been fairly common for that to happen lately. Usually after about an hour or so, John or I will poke our head in and say, time for bed girls! And then about 10-15 minutes later it drifts off to silence. Tonight I went in there and they were both lounging on the couch in their room just gabbing away. Each girl was holding a pair of socks. When I came in they wanted me to put socks on their feet. Maddie had "princess" socks that had a ruffle around them. I'm surprised we didn't hear a fight over those socks! But they were just excited to point out to me that Maddie had the "princess" socks.

Tomorrow is looking like a playdate, so it should be another fun day! The goal is to have fun and stay cool in this heat we've been having this past week!