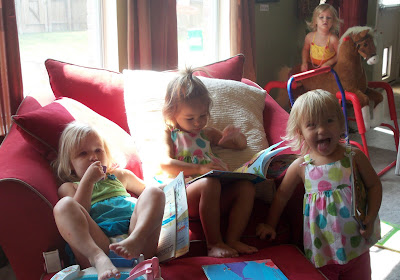 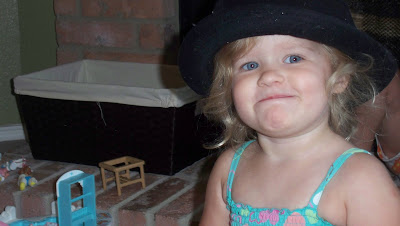 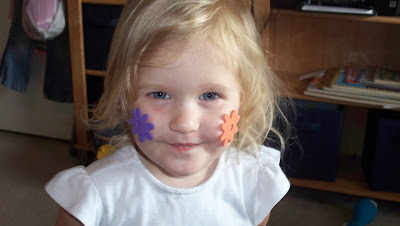 Maddie with two flower stickers on her cheeks!

Last night was date night. John and I went to Pei Wei and then to go see the movie, Inception. That was a very strange movie, but it was good. I was frustrated in the beginning since I had  no clue what it was about, but by the end I was really into all the plot twists and turns. Although, seeing it right before bed, is not such a good idea. I had very strange dreams last night!!

While we were having a good time out at the movies, Maddie and Izzie were living it up too. Nanna and Popo came to pick them up and take them out to dinner and the bookstore. They went to the "bar-b-q-meat restaurant" (That's what Maddie told me this morning.) They ate "macy-cheese and meat, but only some of the greenbeans and only little meat," also in Maddie's words. Then Izzie told me they saw books. I asked her if she saw them in the restaurant and she told me, "No, in the bookstore! I got NEMO!!!!!!!" Maddie told me she got Winnie-the-Pooh book and maybe next week she'd get the Monster book. I think they had a great time out with Nanna and Popo. They wanted to go play at their house this morning but I told them they could go to Nanna and Popo's tomorrow since Madison and Sydney were coming over to play today.

I've been promising Melanie some homemade quiche for awhile and the planets aligned and so I made a small batch of mini quiches this morning. All the kids liked them too, I think. They had a great time playing with their friends. I'm trying to decide what to do for this afternoon. I know I need to fit a grocery store run in at some point, but not sure if I'll do it with the girls or after they go to bed. We'll see.
Posted by Amanda at 2:36 PM