The Wylie Library hosted a puppet show this morning as a last hooray to the end of their summer program. I'm not sure why we are talking about the end of summer in July. This is Texas, summer lasts until September! But anyway, I am not one to turn away a fun morning of entertainment. This morning was a bit hectic trying to get out the door. The girls were in full PLAY mode and I had to convince them that we were actually going somewhere this morning.

One thing that is totally cute is how they are really starting to use their imagination. For instance they set up a picnic for their stuffed friends this morning and then they reached up in the air and got "food" for each bear and bunny to eat. And the other day, Maddie was eating a pretend meal and she said she needed a fork so Izzie reached up in the air and handed her a "fork." Maddie said, "Thank you" and continued to eat her play food.

So anyway like I was saying, the girls were full of playing this morning. Bunny HAD to go to the dentist in the new shopping cart, Teddy was going for a ride in an Easter basket and many other imaginary things were going on. I almost hated to bring an end to it. Somehow we did manage to get dressed and in the car to go to the puppet show.

The puppet show as well organized. Since there were 3 showings back to back, they had us go into the normal storytime room to dance/play bubbles and color while we waited for our turn to sit down for the show. The puppeteer was named Sandy and she was a character. I mean she was one strange lady, but perfect for the kids. She told the story of the Three Pigs with a Texas Twist. Maddie and Izzie had a hard time getting into the show, but once Larry the Big Bad Wolf showed up, Izzie especially was fascinated! After the show she let the kids come up and touch some of her puppets. I was thinking of the grocery store trip I wanted to squeeze in before my chiropractor appointment but when I saw that Izzie wanted to go up and see, I decided to wait the extra few minutes.

She held back for a bit but then bravely made up way up through the crowd to see the puppets. Maddie was hanging back completely. She wanted to go look but was being shy. After Izzie got a puppet Maddie finally ventured up. The only thing left on the table was a tree. She picked it up and said with total enthusiasm, "I got a TREE momma!" It was so cute. Then another kid put back a sheep and Maddie got to play with that. Izzie wanted to take her piggy home with her, but I was able to convince her that it belonged to the puppet lady and we couldn't take it home. I think they enjoyed the show.

The on to Sprouts we went. In retrospect I should not have tried to squeeze in the grocery store trip (sporting a headache and no list.) I forgot half of the things I needed. But we did get a lot of different things so we'll make it until we need diapers or something else and I go back to Target.

Naps having been going very well ever since we separated the girls. Maddie has been sleeping in our guest room for almost a week now and Izzie sleeps in her room. This is just for naptime. At bedtime they are still together. I'm so glad I finally made the decision to separate them. I didn't want to do it, but studies show that naps really are important until the age of at least 4. They help children process information in a dream state an kids who nap learn more. Not to mention they aren't as grumpy toward the end of the evening!

Here are some photos from yesterday and today: 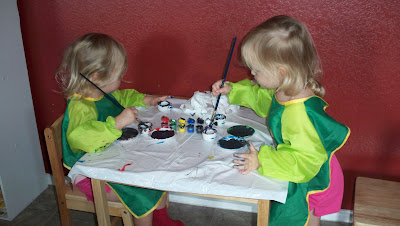 Yesterday we painted little ceramic teapots and cups. Lesson learned... do not give toddlers black as an option. They were looking so cute and then they got ahold of the black paint and blotted out all the colors they had going on. 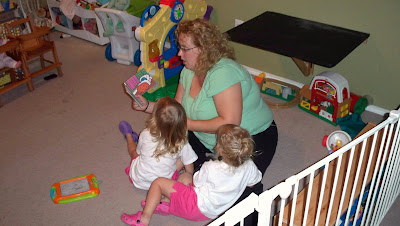 Reading to the girls before bedtime. Maddie, Izzie and Momma. 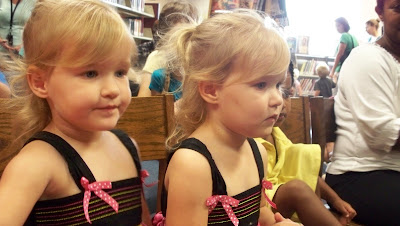 Maddie and Izzie watching the puppet show this morning. 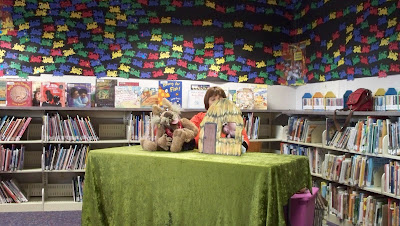 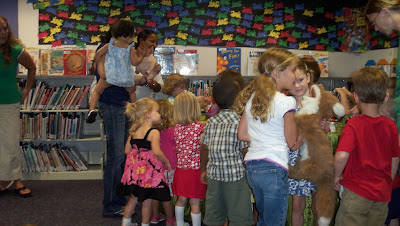 Izzie braved the crowd trying to see a puppet.