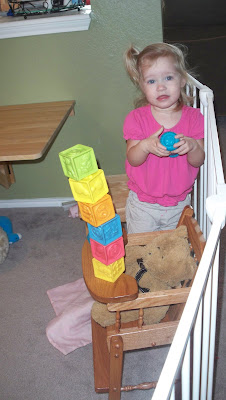 Izzie was super proud of this block tower she made! 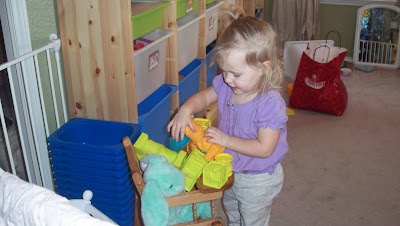 Maddie built hers up really tall too, but then she took all the blocks down and then placed them one by one in this fashion, making sure each one balanced. 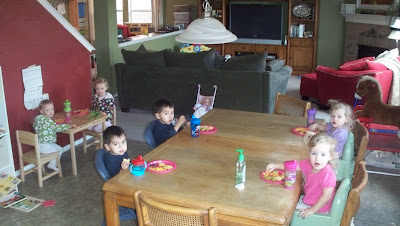 Lila and Zella, Dax and Mason, Izzie and Maddie... 3 sets of identical twins at one playgroup! 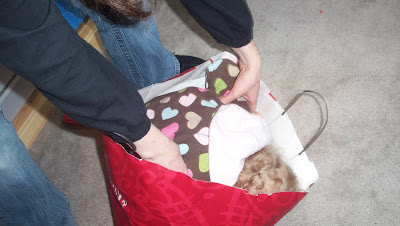 Apparently, Zella was having too much fun and didn't want to leave. She hid herself in this bag!

Yesterday was storytime at the library. I was very excited that the girls were cooperative during the morning. Then the couple of minutes right as we were headed out the door they got stubborn. I never know how much time to allocate to get out the door these days and this is BEFORE potty training! They went several weeks where they wanted to put their own jacket and shoes on. Then they didn't care as much. Sometimes they put them on, and sometimes I put them on them. Yesterday they pulled a fit to do it themselves but for some reason they had difficulty doing it. (They've gotten really good at putting on a few of their shoes and their jackets.)

We finally got out the door and we were still almost at the library 20 minutes before storytime. I like getting there early so the girls can look at the books before hand and so I can (try) and get a good spot on the floor. Well, we got to reading in the kids area, and this other cute little girl started reading with us. Next thing I know, it's 10am. I grab Maddie and Izzie, say a quick goodbye to the new friend we had just met and rush to the other side of the library to make it to storytime. There was a sign on the door that said they were full (due to fire codes) and the next storytime was at 11. Luckily the girls didn't seem to be too uspet that we missed it.

I ended up staying in the library lobby visiting with another lady that got locked out. I didn't want to go home because my friend Ashley and her twins (who made it in the storytime) were supposed to come over afterwards for a playdate. I ended up catching both her and another friend Luisa as they were leaving. We all headed over to my house to play. All the kids had a great time and surprisingly enough there was no fights over the horse or the trampoline! As we were all visiting it dawned on us that we had 3 sets of identical twins playing together! How fun was that!
Posted by Amanda at 1:10 PM