A This and That kind of day

Today was a this and that kind of day. We stayed in our pajamas for a really long time (oh wait, I'm STILL in my pajamas...) and we just hung around the house. We had a cooking lesson. I made yet another loaf of bread (I'm officially addicted to homemade bread!) While it was mixing I sat the girls on the counter on either side of the kitchen aid mixer. They really loved watching it knead the dough. Izzie got a big kick of helping me turn the machine on and off. Then we formed the bread into a ball and put it in a bowl to rise. I told the girls the dough had to take a nap and we covered it with a towel. Later when it was time to shape the dough into a loaf, I let the girls help punch down the risen dough, that was SO cool to them. I have to admit bread making does feel a bit like magic.

Their patience was rewarded and we all got to taste the bread a couple of hours later. In the meantime, we did our "school" lesson for the day. It involved gluing and matching patterns. It really was way to easy for the girls, so next time I'll have to challenge them with more difficult patterns. They still got a kick out of the glue stick. Also, while waiting for the real bread to cook, the girls went off to their playroom for a while and I went to the office to keep working on the PAMOM newsletter. Izzie comes into the office after a few minutes with a green bowl that has some plastic peas in it. She tells me that it is dough and she is making bread. She needed a towel so she could put the dough night-night. She really was paying attention! 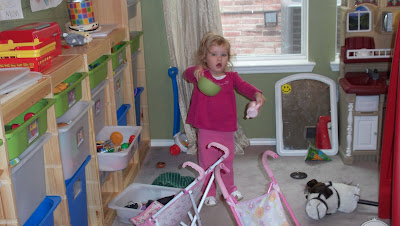 Izzie's green bowl that she made "dough" in. 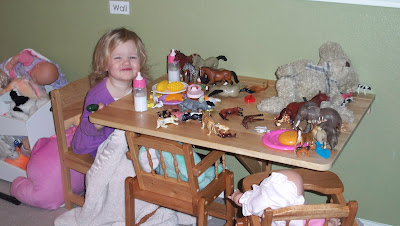 Maddie. Not sure exactly... I think Izzie was serving her lunch. Somehow a zoo was involved. I don't think I quite figured out exactly what was going on, but it was fun, as the smile on her face says. 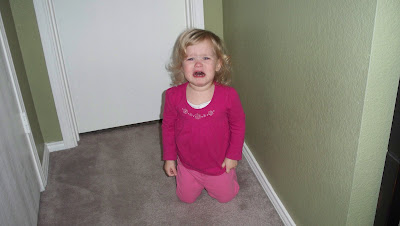 Uh oh... Time Out. I told her I was going to take a picture and send it to Nanna, Grandma and Mema to let them know she wasn't listening to Momma and she said, "NOOOOOOOO!" 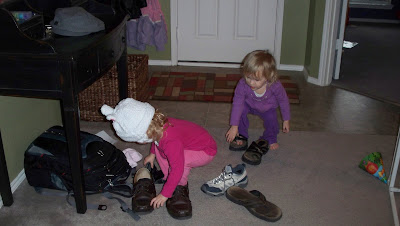 Izzie and Maddie playing in the shoe bin we keep by the front door. This was GREAT fun and kept them happily entertained for at least 30 minutes.
Posted by Amanda at 7:32 PM