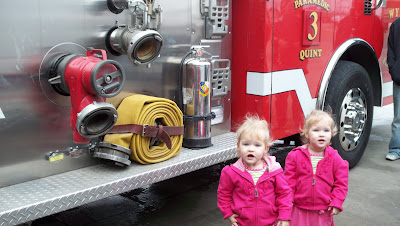 Maddie and Izzie in front of the truck. 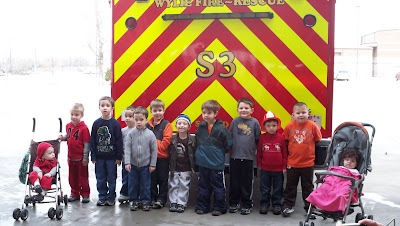 Most of the kids that were at on the tour. Maddie and Izzie would not get in the photo. There were only a couple of girls, the rest were all boys doing the tour! 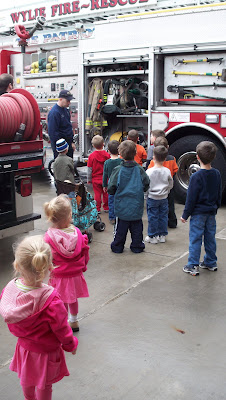 Maddie (left) and Izzie hung back a bit but they were listening for parts of the presentation.

This morning my Wylie Mom's Meet Up group met at a local firestation for a grand tour. I'm not sure if I ever went on one when I was a kid (I don't remember going on one) so I was probably more excited that Maddie and Izzie. Considering they have no idea what a fireman really is. They have seen firetrucks before and I think they liked seeing the BIG truck up close.

We got the tour of the inside of the firestation first and then headed out to see the trucks. The Fireman was showing us all the hoses and gear when a 911 call came through and we had to get out of the way so the firemen could head out. It was neat that they got to see the firetruck leave the station. We all hung around for about 15 minutes to see if they would come back but then decided to leave. We didn't get to finish our tour this go around, but it was still a nice morning out.


Fire Truck leaving the station.
Posted by Amanda at 1:28 PM