A visit from the Paci Fairy 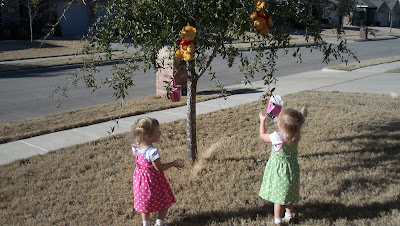 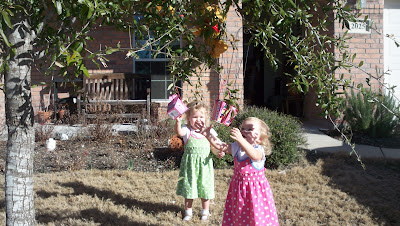 Maddie and Izzie finding the presents the Paci Fairy left behind. 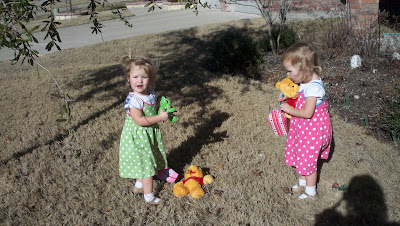 A frog, bunny, Winnie the Pooh, bracelets and some pencils. 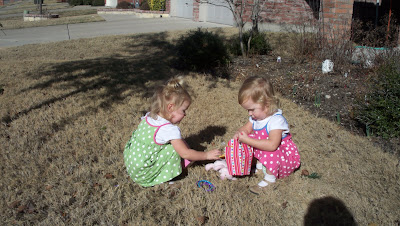 Unlike the Tooth Fairy, The Paci Fairy is very special. She only comes to visit you once in your entire life. When a toddler gets old enough that they don't need their pacifier anymore, the Paci Fairy will deliver a letter and an empty box. The toddler puts their pacifier in the box after listening to the letter and they go take a nap. While they are asleep they Paci Fairy takes the pacifier (she delivers them to babies that still need them) and leaves a surprise and a new lovey in the now empty box. Our Paci Fairy left the presents in our oak tree in the front yard.

I was going to have the girls put the boxes outside for the Fairy before naptime, but it didn't work out that way. I've been putting off this entire pacifier process because I didn't want to deal with the crying that I fear will happen. Today during naptime, another day in a string of days where there was no sleep actually happening, Maddie dropped her paci on the floor. When I went in to check on the girls, I noticed that the paci was ripped almost in two. I didn't want it to break off all the way and have her chewing/choking on the rubber. I made a quick call to the Paci Fairy pronto! (It's so neat that now that I'm a Mom I have the numbers to all the important people in life....) She came very quickly. I read the girls the printed letter that she wrote them and then they deposited their pacis in the boxes during naptime. I was hoping that they would still lay down for a bit of a nap, but it didn't happen. So about an hour later I finally got them down and they went outside to see their present. Both girls were very excited to see their presents hanging from the tree. They got some bracelets, pencils, a small stuffed animal and a new lovey (Winnie the Pooh.) My thought is to have Winnie the Pooh in the crib with them tonight, so if they wake up in the middle of the night wanting their pacies I can remind them that they traded it for Pooh. We'll see if that works!
Posted by Amanda at 4:58 PM

Email ThisBlogThis!Share to TwitterShare to FacebookShare to Pinterest
Labels: a first, development, milestone