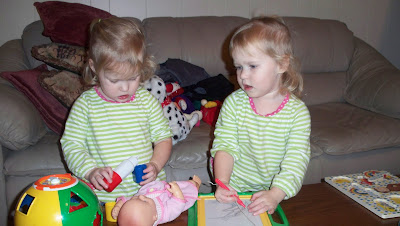 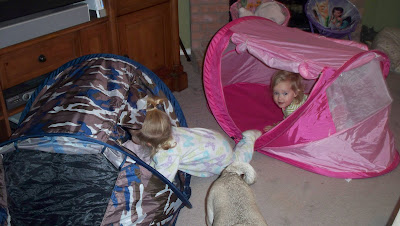 The new pop-up tent I bought used (that's why it's blue camo) and the princess pink one I bought when the girls were itty bitty. (Maddie & Izzie)

I'm trying to decide if I'm sick or not. The past two days I convinced myself it was sinus issues, even going out and buying sinus medicine for the first time in my life. Today I feel like I got hit by a train and I don't think it's sinus. I think I have a head cold, but I'm still in denial. The girls were pretty good this morning. They were playing a lot by themselves but they turned into human tornado along the way. For the most part Maddie and Izzie know to only play with a few toys at a time, cleaning up as they go. It's something I've been trying to teach them since before they could walk. Today they took that and threw it out the window. They dumped out all their toy bins, they emptied out my pots and pans, they got out all their magnet letters and animals, books, and more. I wasn't feeling well so I didn't care. Luckily though, with a bit of help from John and me, they did end up cleaning most of it on their own. The good thing is that it seemed to wear them out because they are upstairs sleeping peacefully. (KNOCK ON WOOD!)

I can't be sick because I'm looking forward to this week. We have a new free gym class to try out on Monday and a playdate on Wednesday. Since we are missing story time on Wednesday, we'll probably go to the library on Thursday and then we go to visit Mema on Friday! That is why I bought a new (used) tent for the girls. They are too big for the pack n plays. The last time we tried to use them they looked pretty uncomfortable in them. I figured having a tent that they can take to Mema's, Grandma's or Nanna's house would be a fun way to travel. Back in the olden' days I slept on a sleeping bag on the floor, but that just isn't nearly as cool as having a tent! So anyway, we'll see how it goes this weekend. I have them out right now so they can get used to them. I keep telling them that they get to sleep in the tents at Mema's house. Hopefully all the talk will work! 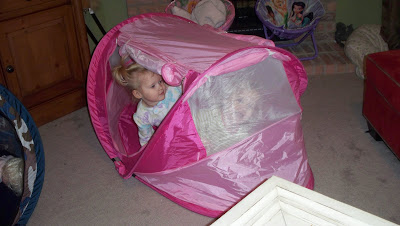 Maddie and Izzie playing peek-a-boo.
Posted by Amanda at 1:29 PM