I can't believe Melanie braved the 15 degree weather to come over to my house this morning for a playdate, but I'm sure glad she did. We had fun mostly hanging out in the toy room. At one point though, I rolled out some butcher paper for the kids to color on, on the kitchen floor. Maddie and Izzie enjoyed that more than Sydney or Madison. Sydney really liked the girls Animal magnets. Madison liked playing with the baby dolls and the toy kitchen. I made an Orzo Chicken Salad for lunch today and all four toddlers liked it even though it had spinach in it!

I put the girls down for nap at 1, shortly after our friends all went home. They did not nap. They were up there for 2 hours NOT napping. I went in there at one point and Maddie told me she wanted to play yoga. I bought them an ABC Yoga video yesterday and we got through about letter H before they lost interest. Izzie never participated, just watched and Maddie only tried about 2 poses. But today she was asking to play it. I told them after they woke up we could do yoga. (Maddie calls it O-ga.) At about 3 o'clock when I realized they were not going to go to sleep, I went in their room to get them up. Maddie said, "Yay! O-ga Now!" I asked them if they wanted snack first. Nope. They both wanted to "Play O-ga!" So we did.

They both did all the poses (as best as they could) for the entire 26 letters of the alphabet! It was just too adorable! The video says for ages 3-6, but some reviews said they did it with their 18mo olds. I thought some of the poses were too hard for them, but that gives them something to work towards. They even sat still for "letter O" which was to sit still and say, "Ommmm." All in all, it was very good video and I think we are going to have a lot of fun doing it over and over. 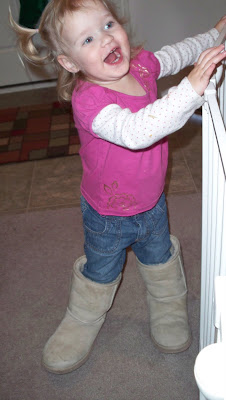 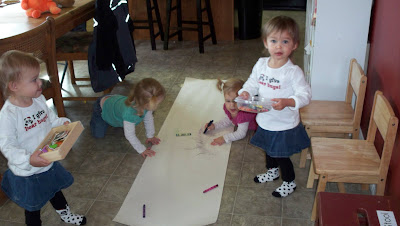 Sydney, Maddie, Izzie and Madison in the kitchen. 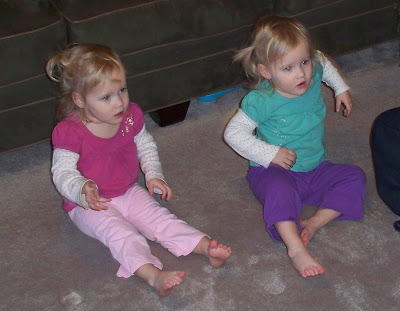 Izzie and Maddie doing the butterfly pose. Their toes are supposed to be together and they wave their arms in the air like wings. Then they flap their leg wings too. Maddie did both parts, Izzie had more fun with just the arm wings. 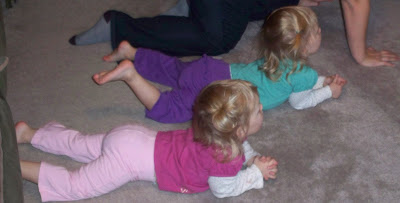 A is for Alligator pose. We laid on our bellies and snapped our hands out in front of us like big jaws. Then we kicked our feet out like a big alligator tail. Both girls really liked this pose!
I
Posted by Amanda at 3:54 PM