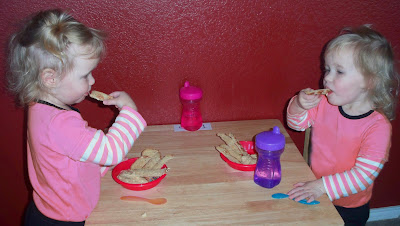 Not the best photo of Izzie and Maddie eating the snack they made.

The girls actually took a nap yesterday. I was thrilled. The only problem was that Maddie woke up before Izzie and I don't think Izzie was done napping. She woke up very slowly. Instead of rushing them downstairs; which I have learned the hard way will ONLY lead to crying/fussing and bad tempers all around. To avoid this, I took them into my room. Maddie crawled up in my bed and played for a bit while I just sat with Izzie and let her wake up very slowly. Maddie noticed a banana that was on my bedside table that was on the ripe side. She said she wanted it for snack. It was a bit too ripe to just let them hold it and eat it so I quickly told her we would make a dip out of it!

That piqued Izzie's interest and they were both ready to go downstairs. We sat at their little table and they helped me mush up the banana and add the other ingredients. Izzie exclaimed she wanted cinnamon in it! (I add cinnamon to their applesauce and oatmeal among other things so she is always hearing me ask, "Do you want cinnamon in it?")

I was going to put some graham crackers for them to dip but they were missing... (uh hum... Daddy....) anyway, I made some toast and they got to dip the toast sticks. It was super yummy, they ate the rest up with a spoon. For the complete recipe visit The Frickin Chicken!
Posted by Amanda at 9:05 AM