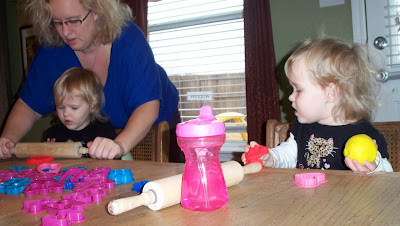 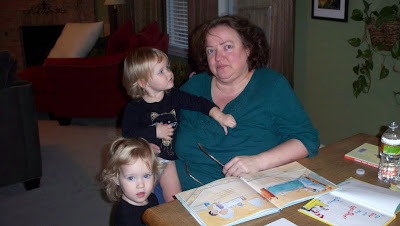 This week has been so busy! I didn't realize I planned an activity for every single day of the week. Sometimes it's good to have that much going on, but I definitely need to balance it out with those weeks where not much happens. My whirlwind week: Monday: Playdate at Melanie's with Alison. Tuesday: ASI Gymnastics Class. Wednesday: Playdoh Playdate at Sharon's house. Thursday: Grocery Shopping (an entire morning event when you take two toddlers!) Friday: Playdate at Jessica's with Melanie and Alison's kids.

John gets back from Boston tonight, but he was only gone for a short trip. My mom and Chris came over last night to eat dinner with us, play for a bit and then she stayed to watch Project Runway with me and Melanie (who joined us after the kids were all asleep.) This morning was a playdate at Jessica's house. Maddie and Izzie had a great time, I know. Maddie even told me on the way home. "Hayden Home Fun." Yeah, I know Madison and Payson live there too, but they've really taken to Hayden. Not that they actually play together. All the kids are still at an age where they play in the same room but not with each other. It's starting to show up here and there. Izzie and Maddie are starting to actually play with each other instead of next to each other, it won't be long before they include friends.

Next week is already starting to fill up, I'm excited about a tour of the Fire Station on Monday that my Wylie Moms' Group has planned.
Posted by Amanda at 3:00 PM

Email ThisBlogThis!Share to TwitterShare to FacebookShare to Pinterest
Labels: playdate