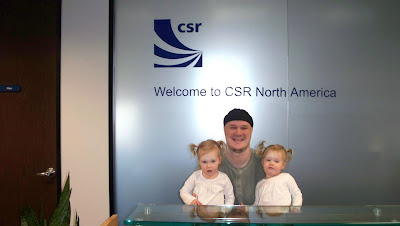 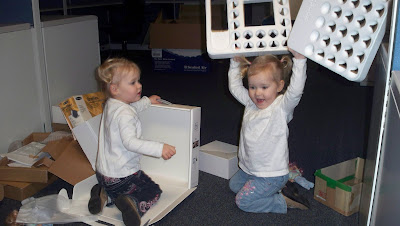 Playing with boxes that were in the back room. 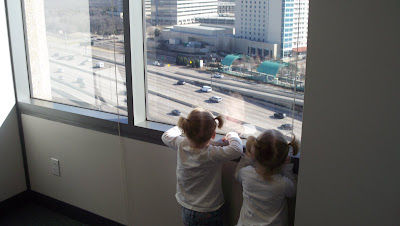 Taking a look out the window at the freeway from one of the conference rooms. 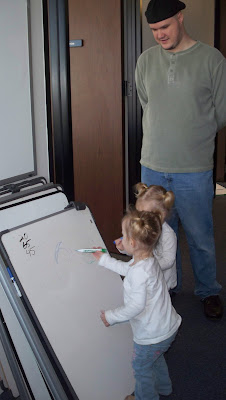 Izzie and Maddie drawing on a stack of white boards while Daddy watches. 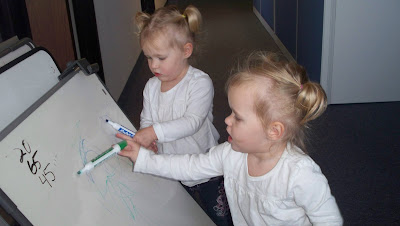 Maddie and Izzie (left to right) 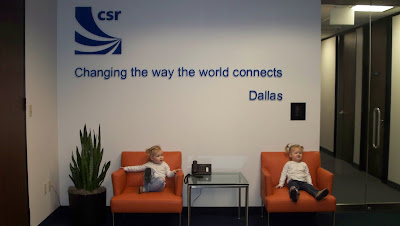 Izzie and Maddie chillin' in the reception area.

CSR Dallas was having a bit of an early spring cleaning today. The plan was for everyone in the office to go out to lunch and then spent some time sprucing up the office and doing a bit of organization. John said it would be a perfect day for the girls to come up to visit him at work. We got there a little after 10 and the girls rode the "alligator" (Elevator) up to the 10th floor where Daddy's Work is. Currently one entire side of his office is empty, so it's rows of cubicles. (It would be an awesome place for a 5-6 year olds game of hide and seek!) There was some empty boxes and they had fun playing with them and stacking them. Then they climbed in a couple of office chairs, wrote on a white board, looked out the 10th floor window to the freeway below and did lots of running in the empty space.

Then we went over to where John's desk was and said hi to everyone. The girls had fun playing with a couple of balls that were desk toys. They found an empty tube mailer and we showed them how to roll the ball down the tube and watch it roll away. Izzie was having so much fun chasing the ball, she ran back and forth over and over. Maddie got shy when Mig started taking photos of them playing but I know she had a good time too. S

Shortly after 11 am we all headed out to The Twisted Root a local hamburger joint. I figured out what the name was all about. They had curly fries, which are from a potato which is a root vegetable.. The Twisted Root. Love the name! The food was so-so and it was SUPER crowded. I do have to say the curly fries, I mean Twisted Roots were much better than the limp onion strings. While we were waiting for the food, I gave each of the girls half of a banana and half of a box of raisins. I ordered them each a kids grilled cheese & fry. When it came out I was surprised at how big the serving was. I went ahead and put the entire plate in front of each girl, thinking they would eat some of it and leave what they didn't want behind. They are seriously in a growth spurt because they packed away the food. Izzie left a tiny part of cheese sandwich behind and Maddie left a little bit of hers behind too. I couldn't believe my eyes. Growing girls, that is for sure!

They had such a great time visiting John's work and I hope they can continue to visit for years to come. Some of my favorite childhood memories is visiting my mom at work when she worked as a research librarian for Exxon. She had this HUGE office/library. She had a light table (so the engineers could work on maps), she had these really cool special markers, and the bookcases were on tracks, you had to turn this huge dial to get them to roll back and forth. There was usually empty boxes that I turned into forts and played in. An office to a child is just a huge playground. I had so much fun the days she took me to work.

(Here is a previous entry of a visit to daddy's work)
Posted by Amanda at 6:19 PM

Email ThisBlogThis!Share to TwitterShare to FacebookShare to Pinterest
Labels: activity