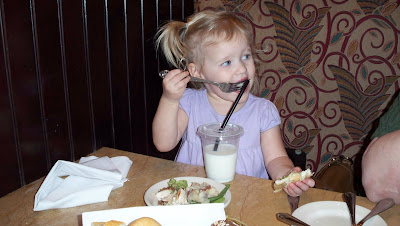 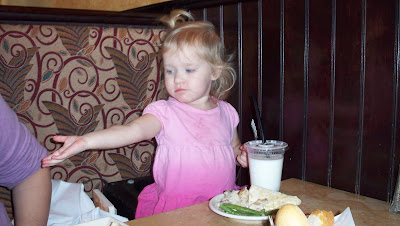 This morning the girls both woke up very whiney and very clingy. After about an hour both John and I were already frustrated with them. I've been wanting to buy them a small table to put in our office so that they could play with their "laptop" computers or color at the same time that we are at our computers. I saw a table at Ikea for $25 and so I called my Mom up and asked her if she wanted to go with me. I must have caught her at a weak moment because she said yes. (She avoids IKEA or any big place on the weekend if at all possible!)

So I left my house at 9:45 am to go and pick up Mom. IKEA is in Frisco about 40-45 minutes away. After picking up Mom, it took about an hour to get there. We meandered around the HUGE store for an hour and half before we even got to the childrens' area. The place is literally a maze and if you didn't have the signage you could probably get lost in there forever and ever. On our way over to the table I thought I wanted, we saw a table that I didn't know I wanted. Then I showed Mom the bunk bed I'd like to get the girls if we can hold the girls in the cribs long enough to have the bunk beds be safe. It's a lot shorter than a normal bunk bed because the bottom mattress is on the floor. Anyway, not sure about the bed, but it's an idea.

We finally made it to the $25 table and it was a huge disappointment, but then, what did I really expect for $25? But it is IKEA and sometimes you get a lot for a little there. I ended up with the Norbo table, which is a drop leaf. I plan on putting it in their toy room, and it can lay flat against the wall when they don't need it anymore. You do have to mount it to the wall so it's permanent once you put it up though.

After our trek through IKEA we looked to see what close restaurants were in the area (I love my smart phone!) Cheesecake Factory popped up on the list and since I'd never been there, that is where we decided to go. Mom forgot to tell me they have slow service. Very slow. The girls were saying, "More food" while signing it after the bread that the waitress brought out. They were hungry! One of the fun things about lunch was that they girls sat in booster seats instead of high chairs for the first time while dining out! And they did really good. I had to remind Izzie more than a few times to turn around and sit down, but Maddie did pretty well.

We didn't get home until after 2:30 which was an hour and half past naptime. Luckily the girls did go straight to sleep, but I had to wake them up at 4. Maddie didn't handle the wake up very well. John had some friends over playing D&D and one thing I'm learning the hard way is that Maddie does not handle loud noises after waking up (especially being woken up.) She goes into MELTDOWN mode and it is almost impossible to get her out of it. It's not that the guys were being overly loud but they were laughing a lot and she just couldn't take it. We spent the next hour trying to calm her down. It was a busy full day and now they are tucked in bed and I'm looking forward to watching Desperate Housewives on tv tonight!
Posted by Amanda at 6:54 PM