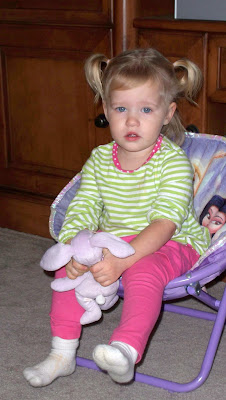 Maddie is a very independent, loving and passionate little girl. She likes to figure things out on her own and has learned the sentence, "No, I do it!" and she uses it very frequently. She likes to kiss and hug all of her babies and she has her toys hug and kiss each other. She also loves to play dress up. Maddie likes to put puzzles together and will congratulate herself after fitting a piece in with a, "Yay! Maddie!" and a clap. She is very determined and will take as long as she needs to figure something out. When she doesn't get her way she stands her ground until you at least figure out what she wanted and then explain to her why she can't have/do it. If the explanation suits her, then she'll go about her business. Her favorite foods are: "cheesy fruit" (cottage cheese, honey and peaches) and yogurt smoothies. Although most of the time she isn't a picky eater, she'll eat (or at least taste) almost anything. 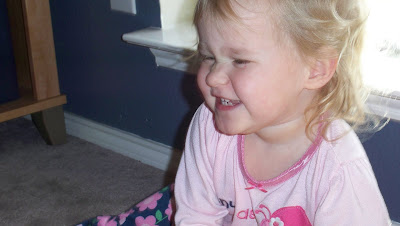 Izzie is a spunky, fun loving and energetic individual. She loves coloring, writing and anything computers. Perhaps she'll be a graphic artist like her Momma! She loves to read books and is content to sit in her Elmo chair and read out loud to herself. She is always trying to sneak onto my computer and wants to write with "Momma's colors" (pens and pencils.) Izzie most of the time likes to go with the flow, and that usually means whatever Maddie decides, but when she has an opinion on something she will let you know fast. And if she doesn't get something she wants the waterworks can start instantaneously! The good thing is that they can usually turn off just as quickly once you figure out what her grievance is! Her favorite foods are: Cake-Cakes (my homemade pancakes), bananas and chicken. She can be a bit picky at times but overall is a good eater.

Both girls can count to about 13 by themselves. They know all of their capital letters and several lowercase letters. They mostly know their ABC song but they skip a few letters while singing it. They can identify several of the ABC's in sign language. They have a HUGE signing vocabulary and an even bigger spoken vocabulary. They talk in sentences a lot now and I can even have a complete conversation with them. They say yes and no to questions when asked, they will tell you Please, Thank You and No Thank You. They also will tell you if they "Like" or "Don't Like" something especially food. Izzie can hold a pencil correctly and likes to "write" letters (small scribbles.) They understand First, Second or First, Next, Then.

Both girls can put on their shoes by themselves, Maddie can take off her shirt with some assistance. Izzie has not been interested in dressing or undressing herself until about a week ago. They both can use a fork and spoon, they put their milk up in the refrigerator (with help opening the door) without being asked. They put their plates in the sink when asked to. They both know what time out means and will usually go sit in time out when I tell them to. Maddie and Izzie usually like to organize and they like knowing where everything goes. After playing with a toy, they will put it up before going to the next toy (with guidance from me!) It's hard to describe everything they know and can do because they amaze me with how much they've learned in their short life. Every day is a new and exciting day with them. 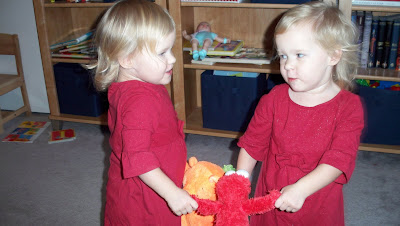 Maddie and Izzing playing Ring Around the Rosie together (with help from some stuffed friends.) 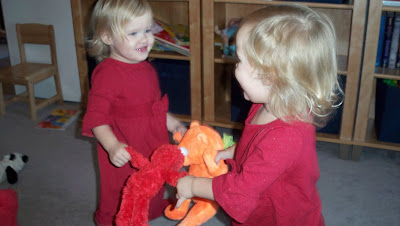 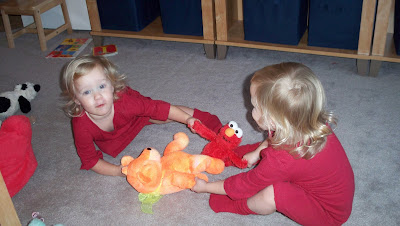 Izzie and Maddie (And we all Fall Down!)

(A thanks to Jessica Melker for reminding me to put together a "now we are 2" list! Her triplets are 1 day older than my girls and it has been so much fun seeing them grow up together.)
Posted by Amanda at 8:42 PM