And it was a White Christmas 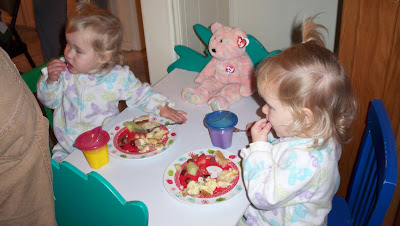 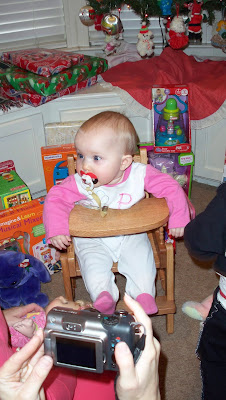 Lucy actually fit in the doll highchair that Uncle Larry made! 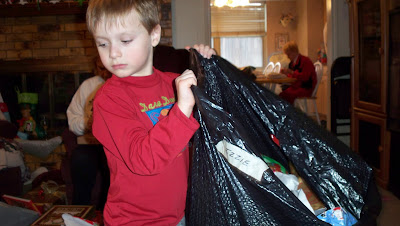 Sammy meticulously picked up all the wrapping paper as we were opening presents. He was a terrific helper! 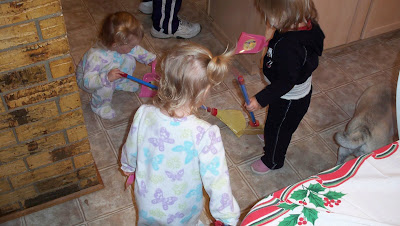 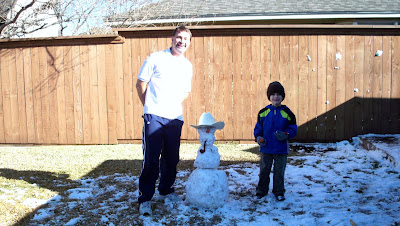 Chris and Sammy with their Texas Snowman.

Today was such a long day that I don't quite remember the morning. As soon as we woke up we headed over to Grandma and Grandpa's house still in our pajamas. This is my 10th Christmas with John and every year that I've celebrated Christmas morning with him we either wake up at his parents house and stay in our 'jammies for most of the morning or we drive there in our 'jammies. Well aparently this year we didn't get the memo that tradition had been canceled since we were the only family to show up in our nightgowns. It was always a favorite part of the Dittlinger Christmas but I guess like all traditions they ebb and flow.

After everyone arrived we let the little kids see their toys. Jackie and Tom sealed off the toy room because they had lined the entire back wall with all the presents. Sammy's were all on the left, followed by Sabrina's, Lucy's, Maddie and then Izzie's. If Toy's R Us is looking for their inventory they should check out Grandma and Grandpa's address because that is where it went! All the kids got some terrific toys/clothes and games. Including handmade heirloom quality doll highchairs made by John's Great Uncle Larry. They are simply amazing! He made one for each of the grandgirls.

After toys we had a huge Christmas breakfast that was delicious followed by more presents. All the families exchanged gifts with each other. That was interrupted of course by all the kids and even pausing for a bit to put toddlers down for naps. Surprisingly enough at one point all the kids age 2 and under (that would be 4 kids) were asleep at the same time! Izzie and Maddie ended up taking a 2.5 hour nap which we thought was awesome because they don't usually nap very well any place other than their own crib. Well, Maddie woke up on the wrong side of the crib and the afternoon was spent listening to her cry about anything and everything. As soon as she would stop crying, she'd find something else to cry about. It was miserable. We finally decided to just head home.

All in all it was a great Christmas. Oh, did I mention the snow? It snowed last night so we awoke to a white Christmas. Sammy and Chris even managed to make a 3 foot tall snowman! I wish the girls could have played in it, but they are still coughing and have runny noses so I didn't want them out in the cold.
Posted by Amanda at 6:50 PM

Email ThisBlogThis!Share to TwitterShare to FacebookShare to Pinterest
Labels: christmas