The Object of Art

I spent most of the morning today working on the Dec/Jan issue of the PAMOM newsletter, Carbon Copies. I still have a long way to go on it too. Since I designed the new logo, I'm having to do a redesign of the newsletter to match our new look. John spent the morning playing with the girls so that they wouldn't try to sit in my lap at the computer and "help" me with my designs!

When I finally needed a break, I took over introducing a new art project with the girls. It was only partially successful. Well, actually it was very successful, it just depends on what you measure the success to be! As for making lasting beautiful art it was a complete failure. For making happy, entertained girls, it was 100% successful. They had so much fun with this simple project that they didn't want the project to end. I think they liked it more than finger painting because deep down, I don't think my girls like to be "dirty." I'll have to work on that some more.

Anyway, the project I came up with was to have them color on some paper with sidewalk chalk. Then when they got a bunch of chalk down, I gave them a brush and some water and let them do "watercolors" with the chalk that was already on the paper. I think if I had used cardboard, or a sturdier watercolor paper or something more durable the project might have had more success (as art). Although restraint on the amount of water applied to the chalk was not high on the girls' priority list! Izzie wasn't "finished" until ALL of her water had been painted on the paper. Which could not handle the water so it had gaping holes in it by the end. Same for Maddie. But they really got into it like I said, so it was fun even though by the end we had a soaking wet torn piece of paper with not much color on it at all! 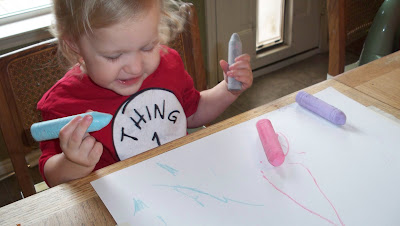 Maddie coloring with the chalk. 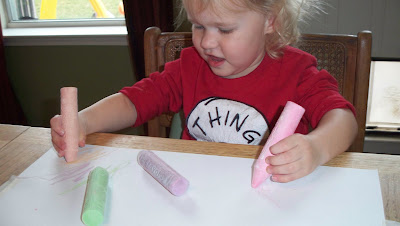 Izzie can write with both hands! 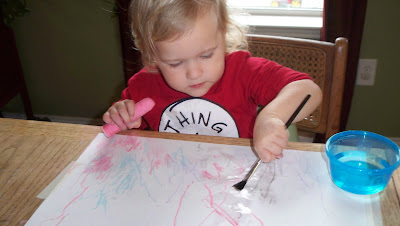 Maddie starts painting (and it starts out sort of nice!) 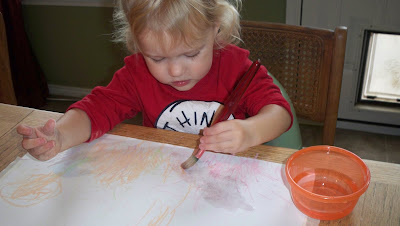 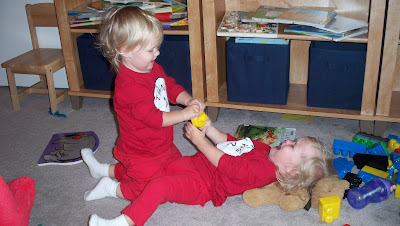 Here is a picture of the girls fighting over a lego. It's the only circle lego in the box so of course they both wanted it. (Izzie is on the ground.)

This afternoon I took the girls to Payless Shoes to buy black dress shoes to match their super gorgeous princess Christmas dresses. I decided to forgo the stroller and just let them walk in the store with me. It was a success! They did great. I told them before we went in the store that they weren't allowed to touch unless Momma said it was okay. And surprisingly they pretty much did that. Maddie had to play with the shoe strings while I was checking out, but mostly they just followed me around and were little angels. When we got home they wanted to wear their NEW shoes. So they were running around the house with dress shoes, sports socks, a t-shirt and a diaper. Cute, huh?
Posted by Amanda at 7:31 PM

Next time give smaller snack size cups with water. ; )