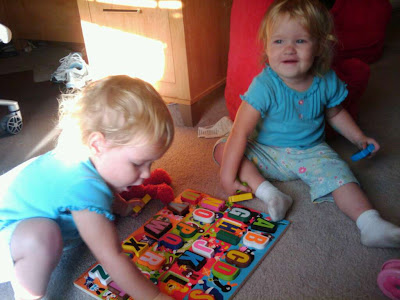 Izzie and Maddie playing with the ABC puzzle.

It was a typical Sunday around here. I spent a lazy morning with the girls in their jammies. Then John watched the girls while I went to Walmart for a few last minute costume accessories. Still looking for some blue gloves for John, but we may skip on that if we can't find them. The rest of the morning was spent cleaning house a typical thing around here most Sundays. The girls took a great afternoon nap while the guys played D&D. After nap I ran to Home Depot with Chris, who helped me buy some boards to finish off the girls storage unit. I've decided to just put a board across the top with another skinny board to act as facing. We were able to match the wood closely so it'll just cap off the top and make the piece look like a complete unit.

After dinner I took the girls on a walk down the street. It's nice that they are old enough to walk and actually go a bit further. But tonight we had a melt down. Izzie didn't want to hold my hand to cross the street and I ended up having to carry her home. I felt bad for Maddie because she was listening to me SO well and having a good time, but Izzie kinda was a party pooper. So here I am walking down the street holding a screaming, squirming toddler and singing "The Ants go Marching" for Maddie, trying to let her have some fun even though her sissy was being a royal pain. I tried giving Izzie a second chance to walk home with us, but she just threw herself to the ground and wouldn't budge. I thought we had calmed her down for bath but she just screamed through the entire thing. By this point she had obviously forgotten what she was crying about. We calmed her down and put both girls to bed, but she took a bit to get down. I think she's sound a sleep now though. Maddie is still babbling up there talking to herself.

I did have one moment of, "Oh my goodness I'm so GLAD that Maddie is listening to me!" I was several houses down, and if they had both thrown the same fit at the same time, I'm not sure how I would have gotten them home. I can still carry both girls for a short distance but not if they are squirming fighting me. I guess like all situations you do what you have to do. If both girls had pulled a fit (which, thankfully they tend to take turns and never team up on me that way!) I would have regrouped, sat us all down in the grass as far from the road as possible and just waited until we calmed down to walk home or until John missed us and came looking for us. Oh well, it all worked out.
Posted by Amanda at 7:11 PM