Today for lunch the girls and I had tuna fish. I made their with just mayo and a bit of garlic powder. They love garlic for some reason. I wasn't sure how it'd be received. I'd only tried tuna once before, but that time I put pickles in it. I don't think they liked the pickles. They ate up the tuna today though! 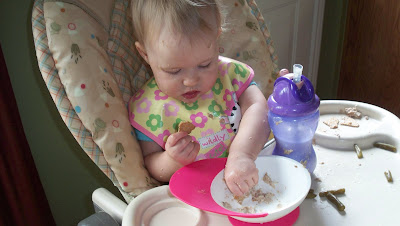 Hre is Maddie, scooping her tuna with her crackers. 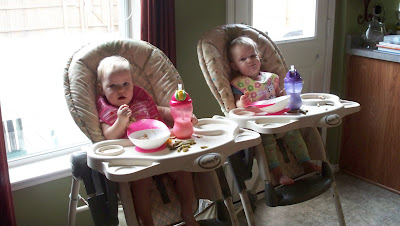 Izzie and Maddie chowing down at lunch time.

A while back I bought the girls these tunnels and a tent that pops out. It was cool for a little while and then got boring. So, I put it away. It's been up for a while and today I needed to kill some time before nap. I pulled the tunnel part out and the girls had a blast. They were racing each other through the tunnel back and forth, back and forth! I took video but I can only upload 100 MB and my video is 108MB, I'll have to figure out how to compress it. Here are some pictures in the mean time. 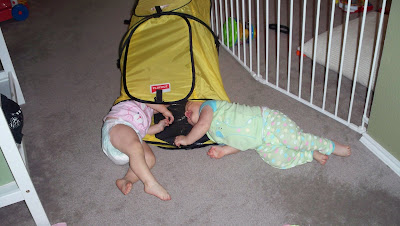 Izzie and Maddie. They were so excited that they bumped into each other trying to get in the opening. Then that made them giggle. 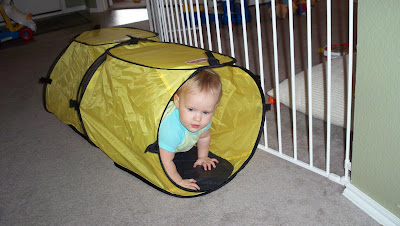 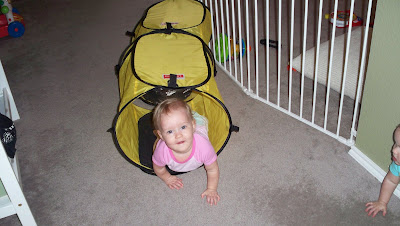 Izzie peeping out.
Posted by Amanda at 1:20 PM