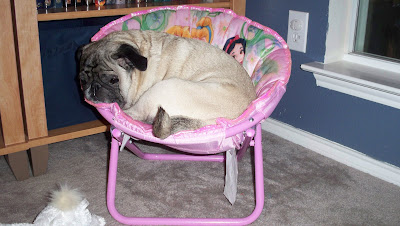 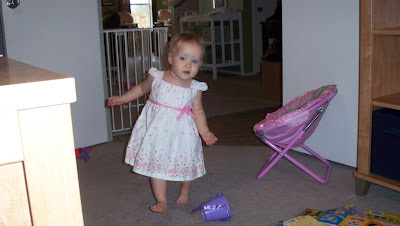 Izzie sporting a cute little dress I bought at Kid to Kid a couple of weeks ago. 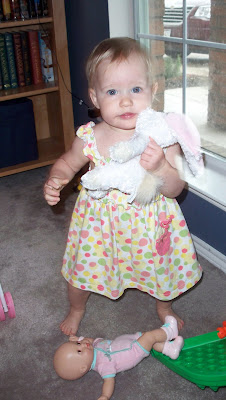 Maddie hugging a bunny that I bought hoping for a substitute to her "lovey" bunny that is slowly dying. This one is good enough to hug, but it sure isn't "BUNNY."

Today is a drizzly sort of day. The rain has been coming and going. Both girls, but Maddie especially are not feeling their best after yesterday's shots. Maddie has wanted me to hold her all morning long. After reading several books in my lap we finally sat on the couch together to watch some of the Signing Time Video I bought the girls a few weeks ago. They really got into that, signing along with the video on the words they know. Neither of them are running fevers, but they must not be feeling well. It's just not normal for them to cry this much or want me to hold them that long. Hopefully after lunch, they will take a long nap and feel better when they wake up.

One other thing we did this morning that held their interest for all of 5 minutes was to go outside on the front porch and watch the rain. Of course the both had to walk out in the rain and both girls had very different reactions. Maddie actually let out this cute little giggle and put a huge smile on her face. Izzie curled up her fists, got mad and ran back under the cover. Then she went out in it again and just stood there still as a statue. She didn't like it, but didn't want to miss out either. It was only drizzling so they didn't get that wet, just a few big fat rain drops on their head.