Last night was my montly meeting with PAMOM (Plano Area Mom's of Mulitples.) I was really excited to go last night, just itching to get out of the house and do some good visiting. The girls were in okay moods, but not great. They only had a one hour nap yesterday so by the time evening rolled around they were a bit cranky. I really felt for John, since I was leaving him to two slightly fussy toddlers, but I did leave the house with a sort of jump in my step.

This is my second month to join the toddler group of PAMOM. Last month ended up being a transition since the new moms and the toddler moms were in the same forum. Last night it was just the toddler mom's. We had a Q&A session instead of a speaker. We got to ask questions about poopy diapers, potty training (for some of the older toddlers), eating issues, switching over to cow's milk and discipline. All the sort of things mom's talk about when they get together.

After the break-out-session, we all converge for dinner and then our main dinner/speaker. I'm sad to say that I just couldn't sit still to listen to the guest speaker. He was talking about finacial planning and it was just too boring for me. I was super hyper last night and wanted to visit. I grabbed my friend Angela and we went to Barnes and Noble to hide out in a corner and just chit chat. I had so much fun just sitting in the bookstore!

John had fun with the girls. Maddie was great, and Izzie gave him a little trouble. At first he thought she was missing me, but it turns out she had a pretty bad diaper rash going. He must have covered it with the ointment pretty well because this morning it didn't look too bad. He said Maddie had a blast taking a splish splash with him, but poor little Izzie just cried through the whole thing. At least getting them down was easy. John and I have been very lucky lately with how well they go night-night (knock on wood!!!)

This morning they slept until 7:30 (yes!!) and we've just been hanging out. It's wet and cold out so we are just having fun playing with toys. We did have arts-n-crafts already this morning too. I got out two old magazines and we had fun tearing up the pages and making "balls" to throw up in the air. Ball is one of their strong words they are saying a lot. When we were finished we had fun putting all the torn paper into a bin while we sang the clean-up song. 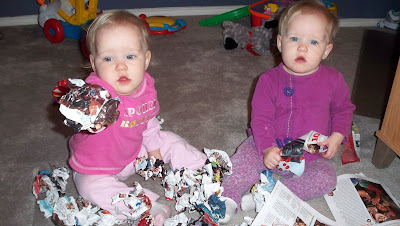 Here's Izzie and Maddie doing arts-n-crafts this morning. (aka deliberately tearing up a magazine with momma's permission is arts-n-crafts!) They had fun. We made paper "balls." 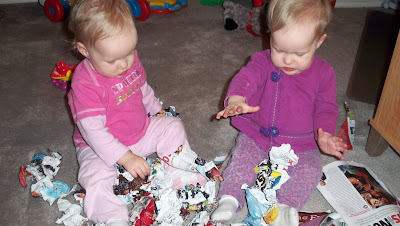 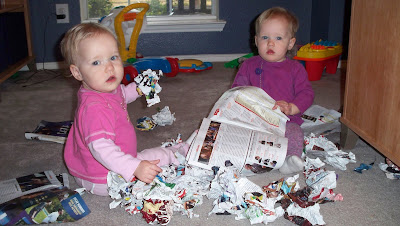