The vast majority of today was spent building a new office. Maddie, Izzie and I did make a quick run to the grocery store this morning, but other than that John and I have been putting furniture together. We ordered a new office and it was delivered today in 9 huge boxes. Mom came over after the girls' naptime and she fed and played with them to keep them occupied while John and I screwed in about a 100 screws. (Thanks Mom, it would have taken us a week to do it otherwise!!) It was well worth the effort, the new desks are awesome looking. We found some that fit perfectly in the room, so they almost look like a built in unit. It's really cool how that turned out. We ordered three bookcases, but we did not get to building those today. It was an exhausting, long day, but John and I really enjoyed spending the time together to build something for our home. 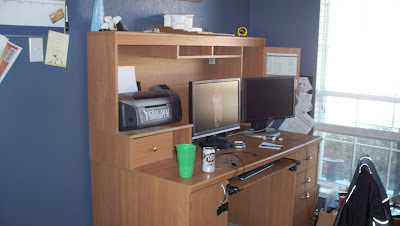 Here's a picture of my old desk as I was trying to get it cleaned off. 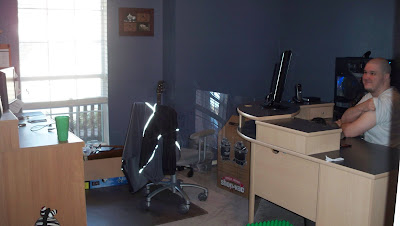 The way our office was set up. My desk was in the corner next to the window and John's was on the wall that the new desks are on now, but his old desk is turned a different direction. 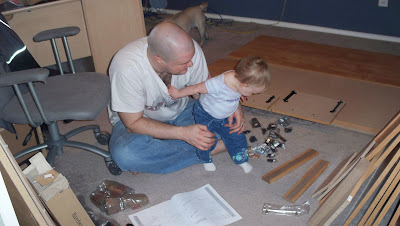 Right before naptime Maddie and Izzie got to investigate a bit. (This is Maddie sitting in Daddy's lap) 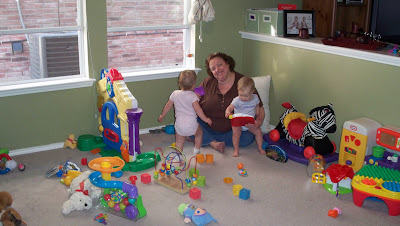 Izzie, Nana and Maddie playing in the "pit." They had so much fun! 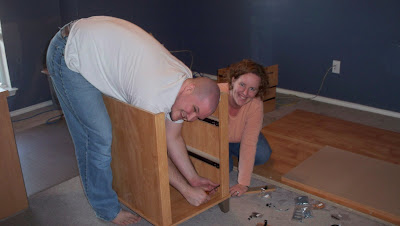 John and I building one of the drawer pieces. 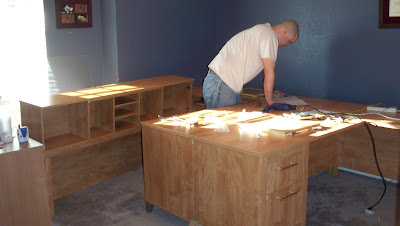 Starting to see the end. We have both desks built and part of one hutch done. 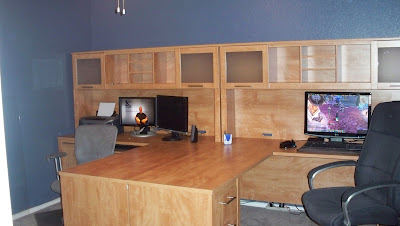 Our desks and hutches complete. We still need to hang our diplomas up and fill in the hutches. And of course there is those bookcases to build.... (they will go on the opposite wall, the one where my desk used to be.)
Posted by Amanda at 7:26 PM

Oh wow!!!!! I'm SO going to show Richard the pics of your new office! It's so funny - he was JUST saying the other day that we should figure out a setup to where we can both work in the office at the same time - and your furniture looks perfect! What a great time to get to build something like that together! And btw, I know you've referenced "the pit" before, but I love that you've name it that. I think we need to adopt the same term for our playroom as well...