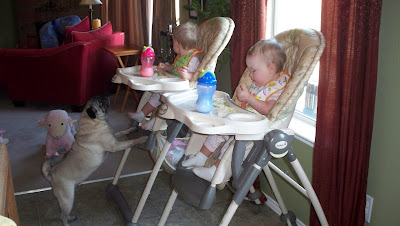 Izzie, Maddie and ... Ripley eating lunch. He sits by not so patiently waiting for goodness to fall from the sky. 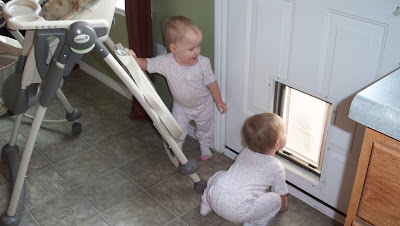 Izzie and Maddie checking out the doggy-door. So far, there have been no attempts to go through it. But they both like to try and look through it. 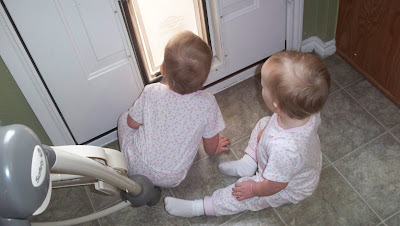 This has been a not-much-going-on weekend. Which we needed after last week. Last week was definitely a hard week that I'm glad is over! Right now the girls are eating lunch with their forks for the first time. The past few days, ever since the tummy bug, the girls have gotten to be a bit picky with what they want to eat. While their tummies were hurt, they pretty much ate Cheerios and Graham Crackers all day long. So, now that's all they want. Well, and fruit. They love fruit so that's good at least. Today I gave them some cheese raviolis and they wouldn't even taste them. So, I pulled out their toddler forks and showed them how to stab the ravioli. After that they ate them all up. (With lots of help from me. They haven't mastered the fork stabbing technique.) To bad I know that tricks like that won't last forever!